● Explore the historic city of Dunhuang that is on the edge of the Gobi Desert.

● Step into the caves of Mogao Grottoes, the home to the largest, best-preserved, and richest Buddhist art in the world—the first cave was carved here in 366 AD. 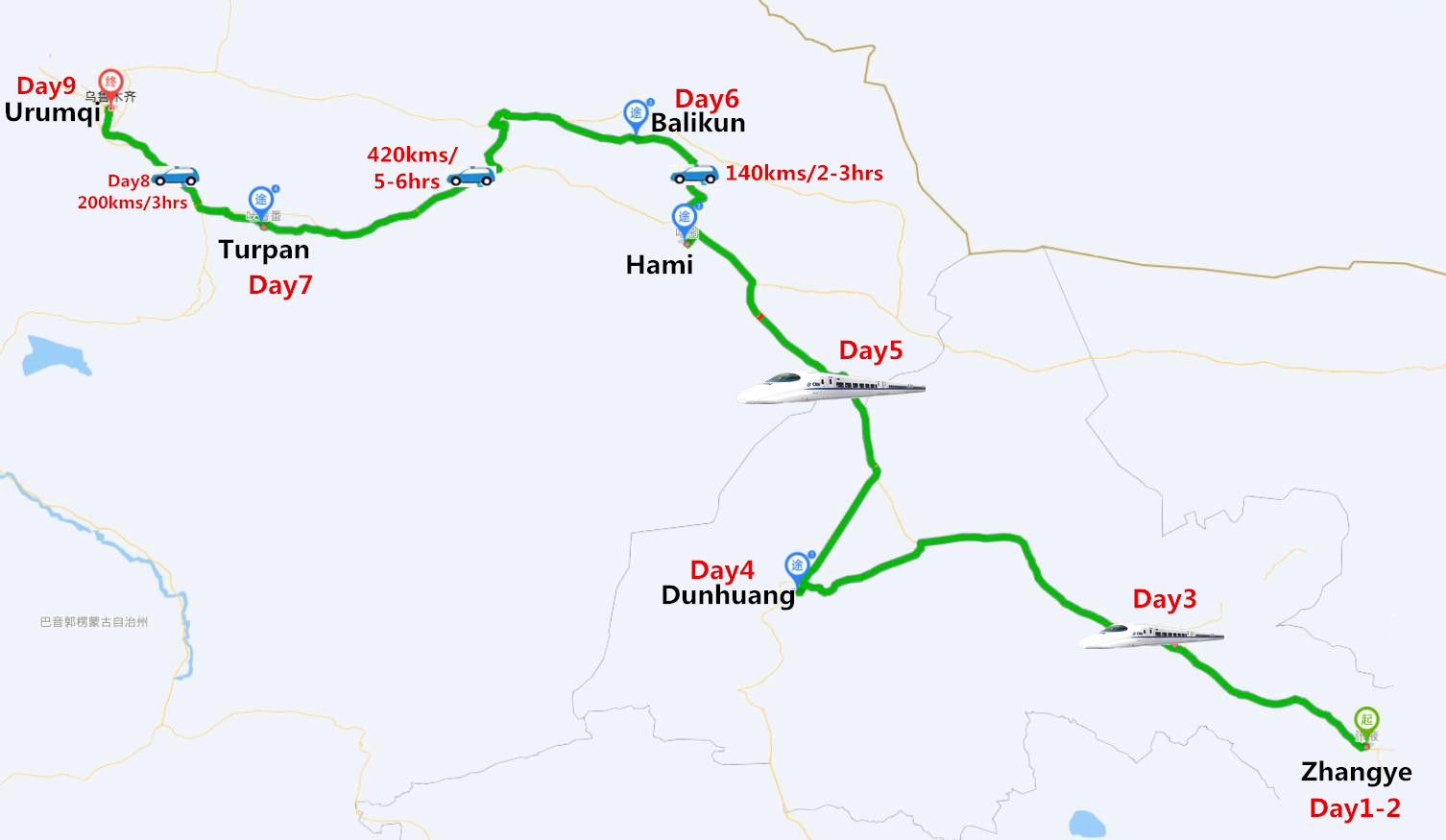 Welcome to Zhangye! Zhangye is a city under the jurisdiction of Gansu Province, which is known as "land of fish and rice" and it has a long history, splendid culture, beautiful natural scenery and unique cultural landscape. Our nice tour guide will meet you at the airport and then escort you to your hotel in a private vehicle and help you to check in. The rest of today is on your own to explore this beautiful and charming city.

The journey today will begin from the Pingshan Lake Valley, about 60 kilometers away from the urban area of Zhangye. It is the closest city compound tourist attraction in China, which integrates natural wonders, canyon exploration, geological research, ethnic customs and self driving cross-country. Here the valleys are deep and the peaks are peculiar. Nature has engraved the colorful mountains into unparalleled and breathtaking landscape paintings with the ingenious creativity. A deep bottomless canyon, showing incomparably vigorous and magnificent. It has been praised as a new discovery on the Silk Road by China National Geographic. We'll spend a night at Kaoshan Tent.

We will head to the splendid Zhangye Danxia National Geological Park, which is the most typical arid area of northern China and it is also the shooting location of some famous Chinese films and TV series. Ribbons of reds, oranges and yellows slice through the rock, to create a rainbow vista contained only by the contours of the jagged mountain peaks. Many people also call it "Rainbow Mountain". Therefore, don't miss the chance to take some nice photos here and explore more about this rainbow mountain. After the visiting, we will travel to next stop Dunhuang by bullet train.

This morning we will visit the well-known UNESCO World Heritage site - Mogao Grottoes, which is one of the great artistic and religious wonders of the world and it is famous for its exquisite murals and various sculptures inside the caves, which was built in different dynasties, spanning 1,000 years of Buddhist art. It's a good place for visitors to learn more about Chinese religious culture and history and you are free to enjoy your time here as much as possible.

Afterwards, we will head to visit the Echoing Sand Mountain & Crescent Lake. When there is wild wind, the sands will be blown up and make loud sound, while the sound sounds like being produced by some ancient musical instrument when blew by breeze.  Here is a Crescent Spring that has been in existence for hundreds of years without ever being buried by the sand, which is unbelievable and  amazing. Riding the camel as the Silk Road Caravan in the vast desert is highly recommended (approximately 40mins). Please bring your sunglasses and mask to keep out the dust.

At twilight, you will enjoy a walking tour to the Shazhou Night Market, the most bustling place of Dunhuang at night. It's easy to lose our sense of time wonder the market while enjoy your leisure time and taste some local cuisine.

Day 5Train to Hami, Explore the ruins of the Balikun Ancient City

Say farewell to the most charming city Dunhuang where you must have an unforgetable memories of the Silk Road. We drive about 2-3hrs to Liuyuan South Station and catch a bullet train to the next stop Hami. Hami is located in the eastern part of Xinjiang and is the gateway to the interior of Xinjiang, an oasis in the desert. There are sweet cantaloupe and grapes. You can have a taste sweet fruits here if time is enough.

Upon arrival, continue the drive journey to Balikun County. Entering Balikun, you can see the ruins of the ancient city wall. it is the best preserved and longest city wall site of the Qing Dynasty in Xinjiang. Furthermore, it is of great significance in studying the military, trade and garrison of Xinjiang in the Qing Dynasty. Afterward, enjoy the local cuisine in a food street.

Full day sightseeing in Balikun Grassland, which is located in the Hami prefecture, in northeastern part of the Xinjiang. The Balikun Grassland is known as the second grandest grassland in Xinjiang and it is also a glamorous tourist attraction. On the Balikun Grassland, the cattle and sheep are plump, the pasture is lush, the air is fresh, and the grass is green. Hence, it is a good place to escape the summer heat and relax in winter.  Nourished by the snowmelt of the eastern Tianshan Mountains, the grassland outline a natural gallery adorned with lakes, springs, streams and forests.

Morning depart from the hotel, we will head for the exotic city Turpan; on the way, you can enjoy the views of Flaming Mountain, the hottest place in China and it is one of the most famous scenic spots in Turpan.  Besides, it is the shooting location of the famous Chinese TV series Journey to the West.

When arrival, a must and first visit is the oldest Uighur village Tuyoq Valley, it is located in the very center of Flaming Mountain Canyon.  Tuyoq Valley is a tourist area with both natural scenery and cultural relics, which is also the most mysterious place and about 55 kilometers to the east of Turpan. This is the cultural land of the four major civilizations in the world. Various religious cultures such as Islam, Buddhism, Manichaeism and Nestorianism collide and gather here. The scenery of the desert canyon and the ancient Uighur villages complement each other. and the Mazaar ancient village, known as the "living fossil of folk customs of traditional Uighurs".

This morning we will drive to enjoy the scenery of Jiaohe Ruins with a history of 2,300 years lies between two rivers on a loess plateau atop a cliff of over 30m. It is one of the best preserved ruins of its ancient era in China, it was include in the World Heritage List on June 22, 2014. Jiaohe Ruins is a city without city walls; it was once one of the most prosperous cities on the ancient Silk Road. It is an ancient city in the Western Regions as famous as the ancient city of Loulan, known as the "Oriental Pompeii". And Jiaohe Ruins is currently the largest, oldest and best-preserved city with earthen buildings in the world. It is the only and most complete Han Dynasty city site in China. Take your time to wander around the ancient city to enjoy the beautiful Jiaohe and take some beautiful photos.

Then we will visit the Sugong Minaret, which is the largest Islamic minaret in China and was built in 1778. It is the product of a historical event, and is an exquisite national architectural art treasure on the Silk Road in the Western Regions.

After the visiting, drive back to Urumqi and at night, it would be wonderful to have dinner in Grand Bazaar, which is currently the largest Bazaar in China. The Grand Bazaar's architectural style and scale are magnificent, and the ethnic minority products in the market are rich and exquisite.The entire International Bazaar is the most ethnic-style place in Urumqi. The garden tower about 100 meters high in the center of the square is called the Silk Road Tower. It is the most famous scenic spot in the Grand Bazaar. There are paintings and exhibitions on each floor of the tower to show the historical stories of the Silk Road and you can overlook the surrounding city scenery from the top of the tower. Inside the Grand Bazaar is a huge market, where numerous vendors sell specialty products from Xinjiang. Dried fruits, clothing, essential oils, and handicrafts are dazzling, and the decorations in the market are colorful and very beautiful, so you can have a good visit.

Today we will take you to visit the picturesque Heavenly Lake. It is a small mountain lake in Tianshan Tianchi National Park, a high mountain area similar to the Alps. The surrounding snow-capped peaks are magnificent. Here, you can take a tour boat, then take your time to appreciate the lake and its surrounding scenery. This is a quieter way to absorb and appreciate the beauty of the lake. In winter, it is a great natural skiing resort. Above all, the trip is worthy for saving money and time thanks to the short distance to the city. Afterwards, we will drive back to Urumqi and transfer you to the airport. Wish you have a pleasant journey home!