The Introduction of Sugong Minaret

As one of the famous destinations in Turpan. Sugong Minaret tower was built in the 41st year of the long reign of Qianlong Emperor during the Qing Dynasty. It is the embodiment of the ancient architectural arts of the Uighur people. The body of the tower is cylindroid in shape, built with bricks arranged in various symmetrical patterns on the outer wall. The tower has 14 windows and a spiral staircase inside going to the top. 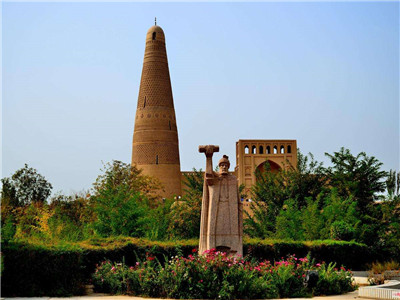 Located in the tableland of Munag village of Putao Town, 2km east of Turpan city, the tower is an ancient Islamic tower with unique style. As the largest ancient Islamic tower in Xinjiang, Tower was built in 1777. At the entrance of the minaret, there is a stele standing under it,which was engraved by two kinds of characters cut in intaglio, one is Uygur language and the other is Chinese character.

In memory of achievements made by his father and as an expression of his loyalty to the Qing Dynasty, Suman, the chief of the Turpan Prefecture and the second son of Emin Hoja who was a famous general of the Qing Dynasty, spent 7000 liang of silver on his own and built the tower. Emin Hoja was honored to be the king of Turpan because his achievements in the fights againt the rebellion. The tower is 44 meters high and 10 meters in its bottom diameter. 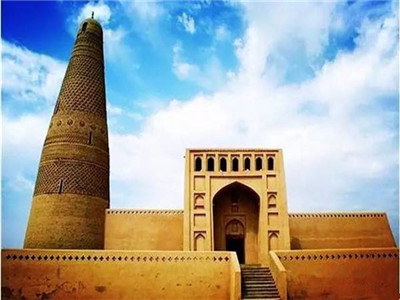