Beacon Tower of the Great wall in Jiayuguan

Beacon Tower of the Great wall in Jiayuguan

Located 7 kilometers south of Jiayuguan Pass, along the Gobi desert to the north bank of the cliff  River, and qilian Mountain across the river, to the river as a risk, is the Ming Dynasty Great Wall on the west end of the Beacon Tower starting point.

The Beacon Tower was built by Li Han in the 18th year of Jiajing (1539).  The original platform is 14 meters long, wide and high, and is a square pyramid. After wind and rain erosion, part of the quayside wall collapsed, making the existing Beacon Tower stand against the wall, which is extremely dangerous.  In the Ming Dynasty, there were total of  39 Beacon Tower inside and outside the Jia yuguan pass , there are big pier and small pier.Ming wall along the road from the Taolai river pier, set up more than 10 pier, Taolai river pier is a big pier, stationed at guard;  It is responsible for passing the military information from south of Jiayuguan to the Qilian Mountains.In case of enemy situation, daytime smoke, night fire, in order to express the fireworks pay urgent report to the nearby Dengtai garrison and the city garrison inside the pass to respond to the battle, in order to defend the nomadic people outside the pass of the harassment. 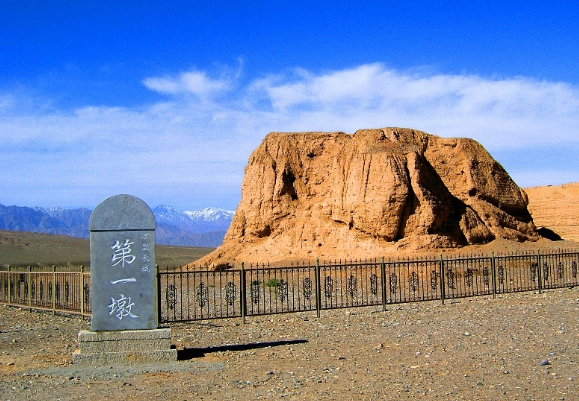 What to Visit in the Jiayuguan

The valley of the Tarai River, the valley is about 20 feet deep, across the valley on the left side of the high platform there is a shanzhai, called the Tarai village.  On the far side of the valley is a replica of a Han dynasty barracks, with statues of "drunken men lying in the sand."  River valley all year round flowing Qilian mountain snow melt water, very clear.  Tarai Canyon is a natural landscape that has been scoured by water for thousands of years.  In many people's minds, Jiayuguan is a far away place.  Especially for those who have never been to Jiayuguan, the sense of distance is almost confused between space and time, which can be described not only by the word "horizon", but also by the word "ancient".  From Lanzhou to Jiayuguan pass, there are two possible roads, one by railway and the other by high road.  Trayai Valley, right cliff with the first pier of the Great Wall in Jiayuguan .There is an underground palace on the cliff under the first pier, the front and back doors enter left and right out, the window facing the south river valley, a number of existing zip lines, link the two sides of the river valley, can take the zip line from the underground palace window to reach the other side of the village. The yellow and brown cliffs on both sides of the valley are the same color as the gobi rocks on both sides of the valley, which are a mixture of loess and gravel.  But all the gravel in the valley was bluest one. 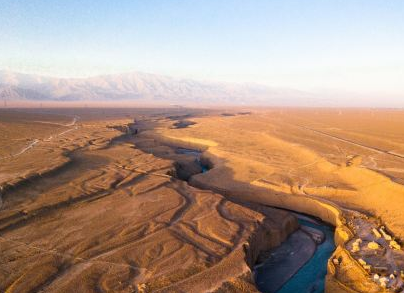 2、"Drunken On the Battlefield" sculpture group

It is according to the Tang Dynasty poet Wang Han's "Liangzhou ci" "wine wine cup, to drink pipa immediately urge.  Drunk on the battlefield, you don't smile, how many people to fight back?"  The artistic conception of creation.  Expressed the pathos of the war, the feelings of the soldiers, calling for the arrival of peace.

According to the introduction, the sculpture "ancient Road" will be located in Lanzhou, the Yellow River style line west section, plans to cover an area of about 10,000 square meters.  The sculpture is 160 meters long and 4 meters wide, with a total investment of 8.5 million yuan and a construction period of 18 months.

"The Ancient Road" is exquisitely conceived and ambitious.  It is made up of 24 sculptures of different historical periods.  The personage concerned here said, "the ancient road is magnificent" after coming to Longyuan, will be the longest in the world is also the only group of performance Chinese nation whole history sculpture group.  Gansu has a long history and also the birthplaces of the Chinese nation.  In prehistory, there were ancestors to multiply and live. Fuxi, the ancestor of humanity, "taught people to do farming" here. Yellow Emperor Xuanyuan made visits to the world here. 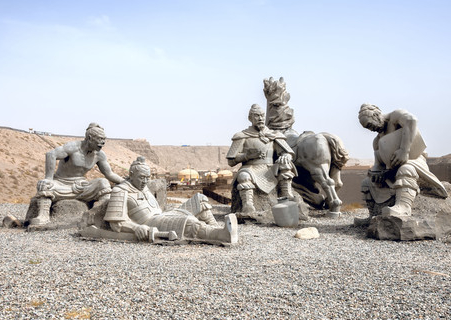 Gansu is the hometown of Fu Xi and Nu Wa, the ancestors of the Chinese dragon, and one of the birthplaces of the Chinese dragon culture.  It is understood that in 2004, Lanzhou built China's only dragon culture as the theme park - Longyuan, through carving, calligraphy, paper cutting, garden and other art forms, portray and express the image and spirit of the Chinese dragon.  It is understood that the "Chinese dragon tripod" heavy 9.9 tons, 0.95 meters base symbol 95 supreme;  The height of the tripod is three hundred and ninety-nine meters. Nine is the largest number, a nine is the meaning of dragon Xiang nine clouds, three is the way to give birth to one, life two, two three, three all things.

It is a building with mud walls and grass roofs, covering an area of 900 square meters. The courtyard with wild interest not only looks simple and natural, but also has the characteristics of ancient hexi dwellings.

Dongyangpo is a village of Jingxing County, located 5 kilometers northeast of Cangyan Mountain scenic area, and The suspension bridge of Dongyangpo has some history.  Along the stairs slowly, through the off-season not beg the Taray River Inn , a suspension bridge from the head for Lai He connected to the head, in winter, the river junction uneven with a layer of ice, but the bottom of the river from the Banks of the river at least dozens of meters, width has dozens of meters wide, stand on the shore looked down, let the people tremble with fear.  Standing on the suspension bridge, the bridge will swing through the harm, let a person have a sense of fear.  But the bridge was strong, and the simple act of telling oneself that it was safe to cross and that there was no need to be afraid encouraged one to go from one end to the other.  Especially when there are people walking on the bridge, the bridge will be more wobbly, at this time, standing on the bridge really have a "cliff" feeling. 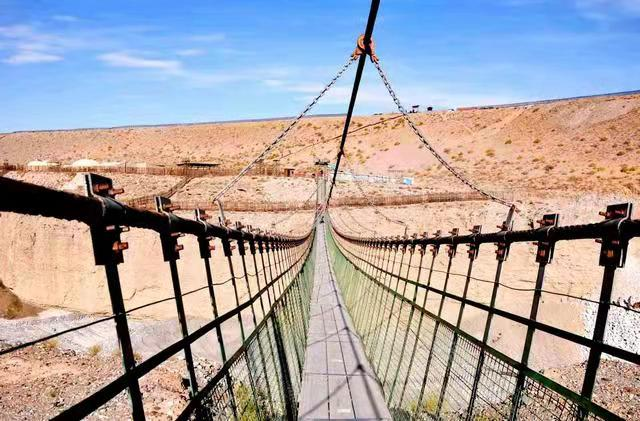