● Pay a great visit the turquoise finger-shaped Kanas lake, the Last Fairyland on the earth to discover Water Monster here as well. 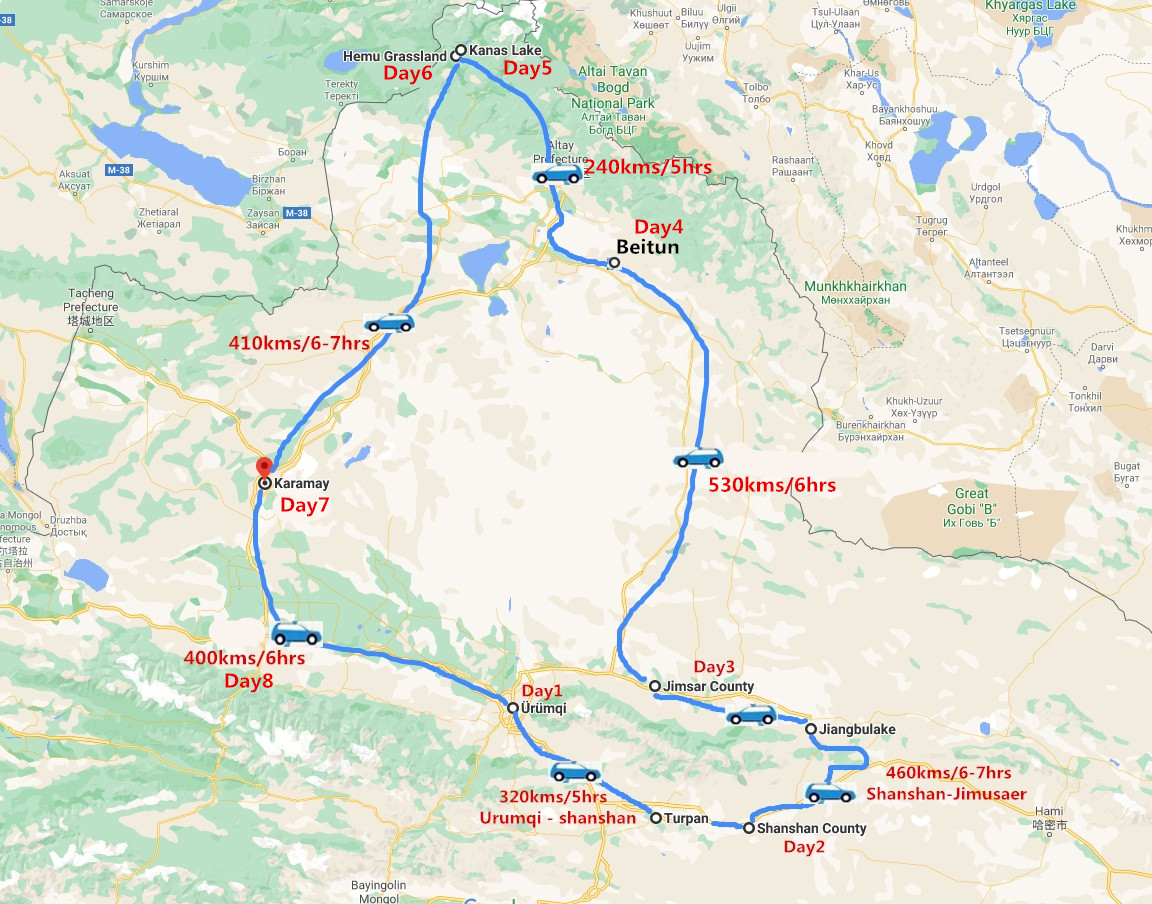 Urumqi, the capital of Xinjiang, known for the homeland for mutli ethnic, cultures, landscapes, and social achievements people have made. When landing, you will be welcomed and get checked in the nice hotel. Have a free dinner and begin your flower tour tomorrow.

Today we will head for Turpan for 3 hours driving. Along the way will pass by the splendid Wulabai Reservoir and Salt Lake, and see the largest Dabancheng Winder Power Station on the both sides of the highway. When arriving, you'll be amazed by the historical sites and oasis land of this ethnic city. The first site in Turpan is Sugong Minaret, the largest Islamic minaret in China built in 1778 by Sulaiman that is the ruler and leader of Turpan to commemorate and commend his father's achievements of the reunion of Xinjiang. Then enjoy the view of ancient Jiaohe Ruins with a history of 2,300 years shaped like a willow leave. It is adorable at that time the city was built in the dotted complete functions and rich in design aesthetics. For the best preserved ruins of its ancient era in China, it was rated as World Culture Heritage on June 22, 2014.

On the way to Shanshan, we will have an exploration at the oldest Tuyoq Village located in Tuyugou Gorge of Shanshan County, where Uiygur's ancestors built a village on it encircled by the Flaming Mountains and bred here for generations ever since with 1700 years till today. Hiking around the best-preserved Uighur Wood and Earth Village is going to be extraordinary and fresh.

One step into the Shanshan County, the other into Kumutag Desert. Thus Kumutag Desert is called "desert in the city". It covers about 22800Km2. The yellow soft sand is a sea without edges. The beautiful undulating sand dune curves are like dancing dragon ridges. Trekking on a camel in the desert accompanied by a mandolin's distant ring has become a memory of the Silk Road. After sunrise, proceed to another highlight of our journey - Jiangbulake, a most beautiful place with the endless grassland, snow mountains and wild flowers. if you come at the end of May, you will be immersed in the beauty of the blooming tulips.

We will relax in the Hot Spring when arrive in Jimusaer, don't forget to bring your swimsuit.

Depart from Jimusaer after a delighted breakfast. We will drive all the way to the next stop Beitun. You can take a short break or enjoy the different views along the road. Upon arrival, check in your hotel and have a good rest.

Today we will drive along the mountain road to the mysterious Kanas Nature Reserve, China's only European-like ecological site that has been awarded the title of the "Pure Land of the World" due to its unspoiled natural scenery. Kanas Lake is the most beautiful mountain lake you have never seen. The lake takes on different colors following the four seasons of the year, sometimes it's crystal blue, sometimes it's dark green, or even gray. See the marvelous scenery at famous Kanas Three Bay(Immortal Bay, Moon Bay, Dragon Bay), you can also head to the Fish Pavilion, enjoy a panoramic view of Kanas.

Day 6Stroll around the most beautiful Hemu Tuwa Village

This morning we will travel to the most beautiful Tuwa village Hemu, tranquil village, herds of cattle and sheep, warm and hospitable locals, What a beautiful and mysterious place! if you want to explore the life of Tuwa people, they will very welcome you to visit their family.

Enjoy your leisure time in Hemu. Having a cup of coffee, or walking around the village. If you are interested, you can cross the the birch forest and take pictures of the sunrise on the Hemu viewing platform. Thereafter, travel along the Gurbantunggut Desert to the Urho Ghost City, also known as Wuerhe Wind City", a unique wind-eroded geological area commonly referred to as "wind city" because of the frequent howling winds.

Day 8Travel back to Urumqi and Airport Transfer

Time flies when you’re having fun. Today you will travel back to Urumqi and catch an afternoon flight to your sweet home. Looking forward to seeing you in another Xinjiang trip.