Kashgar the Stone City is located on the north side of Taxkorgan, it is a famous ancient city ruin on the ancient road in Xinjiang. The fortress is built on a high mount with very precipitous topography. Outside the city are multi-level or scattered walls, between which overlapping stone mounts form a unique stone city landscape. During the Han Dynasty, here is the capital of Puli, one of the 36 kingdoms in western regions. After unifying western regions, Tang Dynasty set Souzhuosuo (as a military station) 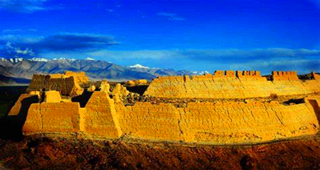 The Stone City site was the capital of Kingdom Puli, one of the thirty-six kingdoms in the Western Regions under the jurisdiction of the Han Dynasty. After the Tang Dynasty had united the Western Regions, the Administration Office on the Pamirs was established here. At the beginning of the Yuan Dynasty, the government did a large-scale reconstruction of the town. During the time of Emperor Guangxu of the Qing Dynasty, the Puli County Office was established and the Town was rebuilt again

The town was built on the stone hill with an earthy structure with a broad base and narrow top. The town wall was constructed with mud and stone. Also, there were some sentry posts and batteries built by adobe. At the four corners it is believed that there were four gates, but only the gate at northeast corner remains seen. The Stone Town had an inner part and an outer part. The outer part covers 3,600 meters in circle, but only the traces of the wall, batteries and residence are barely seen. The inner part is kept relatively intact 1,300 meters in circle. 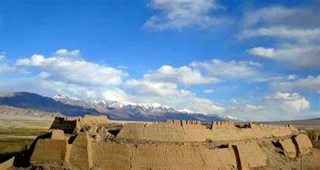 Although the town is small in size, it was as a strategic fortress in the history. At present, the town gate, wall, battlement and parapet, are kept intact.

With its long history, complicated construction, solid structure and spacious area, the Stone Town is one of the three stone towns in China (the other two are Nanjing Stone City and Liaoning Stone City) And now this site is a key historical site under the protection of Xinjiang Uyghur Autonomous Region