Located in Aizirete township, Naizerbag village 5 km northeast of Kashgar City, the Apakh Hoja Tomb ( Xiangfei Tomb ) is the largest and most influential Islamic burial Place in Xinjiang and a fundamental cultural relic unit under the protection of the Autonomous Region. As a Mausoleum of the descendants of an Islamic sage, it was built around 1640 AD. It is said that altogether seventy-two persons of five generations of the same family were buried in the Mausoleum. The first generation buried here was Yusup Khoja, a celebrated Islam missionary. After he died, his oldest son Apakh Hoja carried on the missionary work. He became the chief of the Aktaglik Sect of Islam during the seventeenth century Apakh Hoja died in 1693 and was buried in the tomb. He had a reputation much more well-known than his father's, so the tomb was called "Apakh Hoja Tomb" by people after his times. 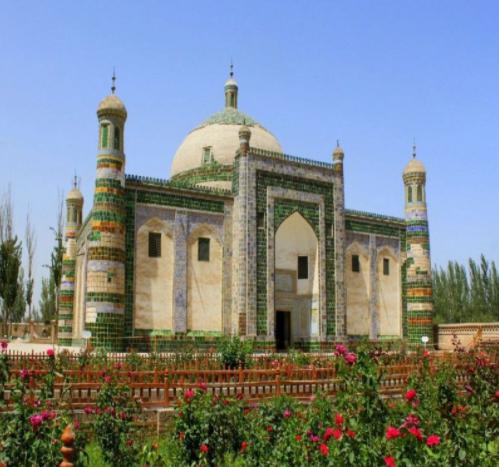 The Origin of Apakh Hoja Tomb

A legend goes that one of the descendants of Apak Khoja buried here was a lady named Yiparhan, who was one of the concubines of the Emperor Qianlong of the Qing Dynasty. Because of the rich, delicate fragrance of A lower sent forth by her body, she was called Xiangfei(Fragrant Imperial Concubine). After her death, Emperor Qianlong ordered 124 people to lift the coffin and spent three and a half years to send the remains to Kashgar her homeland and buried in Abakh Khoja (Fragrant Princess Tomb) in Kashgar. There is a camel sedan-chair, which is said to be the sedan in which the remains of the Fragrant Concubine were brought to Kashgar from Beijing. However, according to textual research, Xiangfei was none other than Rongfei, a concubine of Qianlong. She was buried in the East Tombs of the Qing Dynasty in Zunhua County when she was dead in 1788 at the age of 55, Hebei province after she died.

What to Visit in Apakh Hoja Tomb

When you are entering the Apakh Hoja Tomb, you will be attracted by the magnificent, solemn, and unique ancient buildings with Islamic characteristics. The Mausoleum consists of a group of beautiful and splendid buildings, including the Tomb Hall, the Doctrine-teaching Hall, the Great Hall of Prayer, the Gate Tower, a Pond, andOrchard. The Main Gate is not big but magnificent. On its two sides are tall and big brick columns and gate wall, the surface of which inlaid with blue glazed bricks with white flower patterns. Step into the gate, a small mosque connecting the west wall can be seen, in front of which is a high platform with Uyghur style flower-covered ceilings, worth a careful examination. Behind the platform is a preaching hall to accommodate the daily preaching service of the nearby Muslims. The gate and the small mosque can be regarded as an integrated architectural complex. The Central Rectangle Chamber is 35 meters wide and 29meters high. Its four sides are respectively a half embedded column, which is wide at the bottom and thin on top. In the middle top of the chamber is an enormous hemispheric dome, with a diameter of 17 meters. The tomb maintains a luxurious Islamic and traditional Uyghur architectural style. 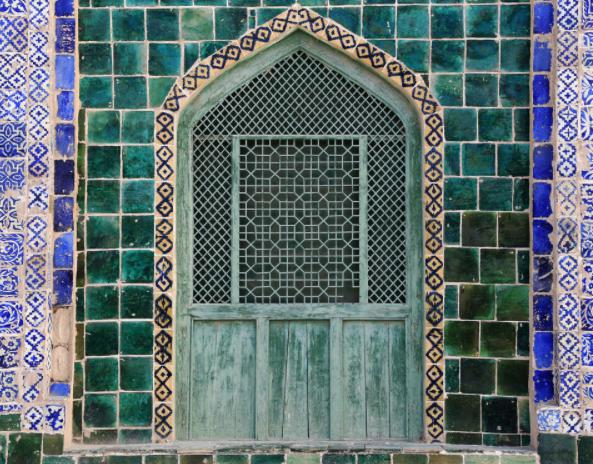 The Tombs in Apakh Hoja Tomb

To the west of Tombs Hall is the Great Hall of Prayer - a spacious enclosure framed by wooden balustrades. The handiwork of ancient artisans adorns the walls. The other significant building is the Doctrine-hall of Teaching.

Built-in 1873 A.D., the Jiaman mosque is a courtyard building consisting of a nearly 100 meters long front porch and back hall. The skillful artisans carve the 62 columns, and none of which has the same patterns; it can be called a scripture of Uyghur woodcarving art.The 21 vaults of the mosque are based on the principles of physics. The Imam is chanting scriptures inside, and people outside can hear it, which played the role of natural sound reinforcement.Note: During the Islamic festivals, Eid al-Fitr and the Corban Festival (10th December), there will be a grand pilgrimage, when thousands of Muslims gather in here to worship and hold a series of celebrations, and that is entirely worth to visit.

The Small & Big Mosque are close to the main gate of Abakh Khoja Tomb. The Big Mosque is for worship in summer, and the Small Mosque is for prayer in winter. Although the mosque area is not large, its architectural style is unique, and its decoration is gorgeous. The mosque decorated with carved wooden columns, the caisson ceiling painting, and the combination of patterns and colors is the essence of Uyghur architecture. It is the crystallization of the wisdom and aesthetic consciousness of the Uyghurs.

The Tombs in Apakh Khoja Tomb 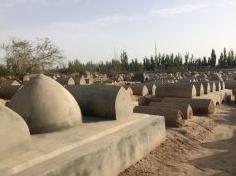 Inside the 85-foot-high (26 m), 128-foot long (39 m)Tombs Hall are several tombs, each covered by the different colored cloth. It built with glazed bricks, and the graves are decorated with beautiful flower patterns set against a white background. The large-sized tombs house the males, while the females occupy smaller-sized tombs.

The Ceremony of Muslim Corban Festival in Apakh Hoja Tomb

We went to Apakh Hoja Tomb in the morning. Throughout the journey, we could see the Muslim people coming from all directions and going to the mosque for worship. We could see the Muslims gathered in the mosque when we enter the Apakh Hoja Tomb at 10:00. Those Muslims who come from afar, led by the Imam ( a religious man who leads the prayers in a mosque ), read their prayers every seven steps until they enter the mosque. Among the worshippers, we can see some older people walking with crutches and supported by some young people, and going to the mosque to worship.Many Muslims will carry small blankets for worship, and they are arranged from front to back according to the order of entering the temple. The forest belt and pavements for filling the mosque are full of Muslims who will attend the gathering ceremony."Gathering Ceremony" is the annual worship activity of the Muslim Corban Festival. On this day, Muslims all over the world will worship in Mecca at the same time. (the specific time varies according to the season of the festival, that is to say, the time of worship is not fixed ).You can see some female Muslims sweeping their deceased relatives after ten o'clock in the public cemetery next to the Mausoleum of Apakh Hoja. They are sorting out cemeteries, put on the blankets, knelt to the west, chanted the Koran, and asked Allah to bless them. Then they take out the millet (or rice) and sprinkle it around the grave bag for the birds to peck.At 10:30 a.m., Mullah ( a Muslim teacher of religion and holy law) began to call Muslim worship. Inside and outside the mosque, as well as in the forest belt, were kneeling full of people who came to pray. When Mullah began to read the Koran, you will hear the sound of Mullah coming from the microphone; all Muslims will stand up and followed Mullah to do three summoning actions ( put your hands around your ears). Mullah read the Koran, and then, all the Muslims bow and knelt, then stood up to listen to Mullah read the Koran, and so on. The whole ceremony will last about half an hour.When Mullah is reading the Koran, the Muslims who listen will whisper it in a low voice. In the corner edge of the mosque, the back of the main chamber of Abakh Hoja Tomb, there are some elderly and devout female Muslims who worship together with male Muslims, and some children who come to the mosque with their families. (according to the tradition, before the Gathering Ceremony, Muslims should take a bath. Female Muslims cannot enter the mosque to worship with male Muslims).At 10:50 a.m after the worship, Muslims came out of the mosque and went home to slaughter sheep, visit relatives and celebrate the Corban Festival.

How to Get to Apakh Hoja Tomb