The Weijin Tombs is located in the northwestern Gobi desert 20 km away from Jiayuguan City and between Xincheng Township of Jiayuguan City and Dingjiazha Township of Jiuquan City, which are ancient tombs of brick paintings dating back 265-420 AD. The wall paintings discovered are lifelike and succinct in style and cover a wide range of subjects including politics, economics, culture, military affairs, folk customs, and science and technology during the Wei and Jin periods. From 1972 to 1979, 18 tombs were excavated successively, of which 9 were portraiting brick tombs and 9 were plain brick tombs. Tomb No. 5 was exhibited in Gansu Museum in May 1973. At present, only No. 6 and No. 7 are officially open to the public. 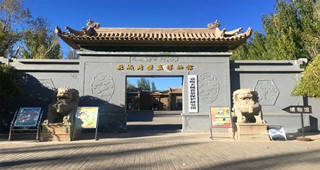 The tombs were discovered in 1972, and ten of them have been excavated. Most of the dug tombs are family tombs in which the dead family members were buried together. They are made of bricks and there are usually 2 or 3 chambers in it. The chambers are linked together by arched slope passages. The doors inside a tomb have paintings or carved patterns and floors were paved with bricks with patterns on them.

On the brick walls, there are frescoes. These tombs are known as the "underground painting gallery". These frescoes are also referred to as "an encyclopedia on the Silk Road" because they vividly show ancient people's all kinds of activities: farming, stock-breeding, hunting, banqueting, playing chess and riding. 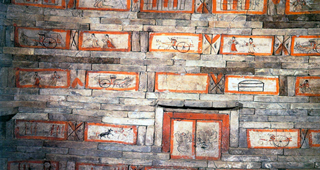 Among these tombs dug, the No. 6 tomb is very representative. It is an official's tomb and its chambers are delicately designed. On both sides of the main chamber, there is a cow and sheep pen, a small room for carriage, a kitchen and a storehouse. The carvings inside the tomb are very refined and delicate and they vividly show the official's whole life: farming, doing business, and becoming an official. There are scenes of labouring and of entertaining as well.