The Red Hill Pagoda, standing on the top of Red Hill Park, is the symbol of Urumqi. It is a folded fault mountain at an altitude of 910 meters. The body of the hill has a reddish-brown color, which gave the park the name Red Hill. Less than one kilometer away, Yamalike Hill stands facing the Red Hill, and Urumqi River lies between the two hills. 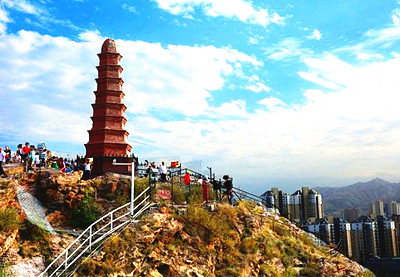 According to geological research, Red Hill rose together with Tianshan Mountains during the Himalayas' orogenic movement about 80 million years ago. There were rare fossil resources on the mountain, and ancient cod fossils which resembling human shoe prints discovered 270 million years ago. Due to its long history and cultural background, Red Hill is commonly seen as the Urumqi City trademark.

Best time for visit: May, June, September, October and November 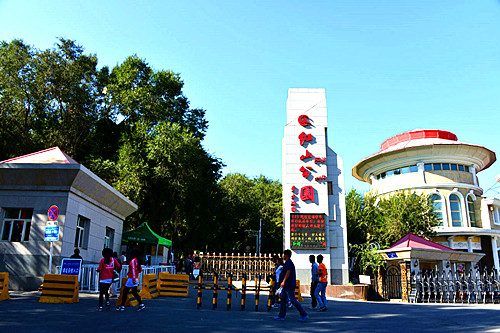 b. Take the BRT2 bus to West Bridge Station and walk about 400 meters after getting off

What to See in Red Hill Park

Today follow me, a native of Xinjiang, to explore the beautiful Red Hill Park. As a landmark of Urumqi, Red Hill Park (Hongshan) is a pleasant spot to visit when you first arrive. There are two gates of Red Hill Park. South gate is located at Hongshan Road, West Bridge, less than a five-minute walk from Times Square Shopping Mall, and East Gate is opposite the Hongshan Stadium. 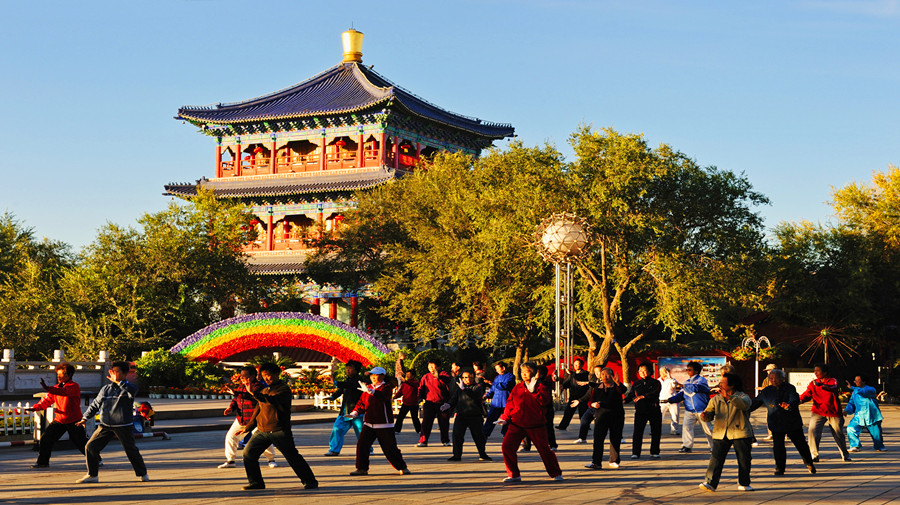 Enter the South Gate; the first place you see is where tourists with children can fish or buy fish food to feed. They can also drive the bumper cars, and ski and skate in winter. Dozens of steps ahead, people who are not convenient to walk can choose to take an electric car (RMB 10/ round trip) up the hill, and find it quite pleasant though the steps to the Temple were steep. For young people, it takes only a few minutes to walk up the steps.

Go forward, there is the Overlook Pavilion (RMB 20), covering an area of 1,150 square meters, is about 21.95 meters tall with three floors modeling architectural style of the Qing Dynasty (1644-1911) with red pillars and handrails and blue tiles. To the level of this pavilion, visitors can get a good view of Urumqi City; here, you can see the Red Hill Pagoda not far away and a sculpture of Lin Zexu.

The road of the East Gate, on the other side, is relatively smooth that older tourists can choose to enter from here. The topography of Red Hill Park is low in the east and high in the west, up a dozen steps; you will first saw a large flower bed with two statues of deer in the middle after entering. 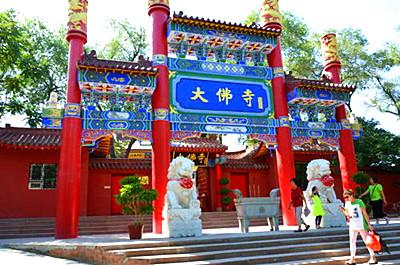 Step by step along the road, the first you come across is the Giant Buddha Temple. It is one of the largest Chinese Buddhist temple in Northwest China. The most unusual attraction is the golden Sakyamuni Buddha statue, which is 40.8 meters (133.9 feet) high. A skyscraper with a quiet, stunning panoramic view is opposite the Big Buddha Temple.

Along the gentle road to go forward is Overlook Pavilion, not far west, first saw the side of a statue which is the statue of Lin Zexu. He was an official of the Qing Dynasty who worked at eliminating opium but was exiled to Xinjiang in 1842 by Emperor Daoguang (1820-1849) after the First Opium War. People of Urumqi set up Lin's statue and a Bronze Tripod of Prohibition of Opium in memory of his great work and spirit after his death, and a drug-resistant copper tripod was placed, to commemorate Lin Zexu's great achievements. Then the Red Hill becomes the first education base of prohibiting drugs in Xinjiang.

To the west and south of Lin's statue is Red Hill Cliff or Mouth of Red Hill. It is called Bala Hada in Mongolian, for the appearance of the cliff looks like the head of the tiger, so that Mouth of Red Hill also called Tiger Head Peak.

The views from the top of the mountain of the surrounding countryside and breathtaking mountains make the steep (but short) climb worthwhile. There used to be a river called the Urumqi River under the Mouth of Red Hill. 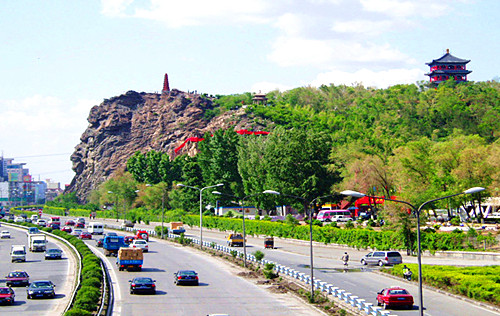 The Urumqi River was flooded, and the residents near Red Hill suffered heavy losses. It is said that Red Hill and Yamalik Mountain on the opposite side are close to each other. Once the two mountains are connected, the Urumqi River north will be blocked, and Urumqi will become a vast ocean. Therefore, in the fifty-three years of the Qianlong in Qing Dynasty (1788), the highest military and political chief of Urumqi built a substantial brick tower named "Zhenlong Pagoda (Red Hill Pagoda)" on the top of Red Hill and Yamalik Mountain ".

Nowadays, the “Zhenlong Pagoda,” with many tourists photographing, is still standing on the mouth of Red Hill, but the Urumqi River beneath the cliff has long been challenging to find. Instead, it is replaced by a broad highway—Riverbank Expressway (National Road 216).

What To Do in Red Hill Park 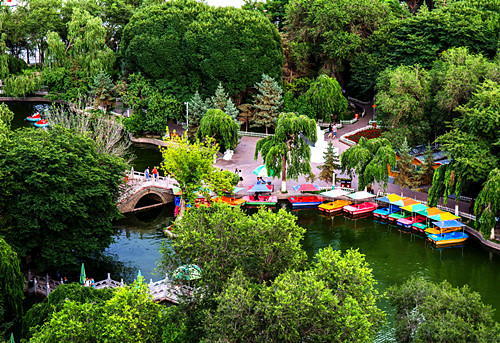 Today, modern entertainment facilities can also be found in the park, and visitors can sit amid pleasant surroundings and enjoy folk music and dance performances. Red Hill Park is a popular, refreshing, and easily accessible getaway in the heart of Urumqi with people of all ages sitting about chatting, playing cards and other games, or strolling about enjoying the breeze and the shade of the tree-lined walkways. Both the residents, as well as tourists from home and abroad, flock to the park during the summer especially.

To the right of the steps is a Children's area. The three sets of steps are quite well shaded with mist blowers and a fountain at the top which overflows and allows water to run down the steps to the left and right. It will be fun walking in the water if you have children. 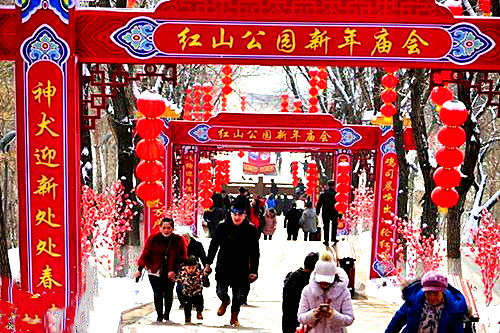 Temple Fair in the New Year

The round bumper boats on the lake are said to be bumper cars on water and therefore provide lots of fun for "children of all ages." At the base of Red Hill across from the multi-lane highway that now occupies the dried-up riverbed is a small lake, that offers fishing and boating facilities, as well as various other amusement facilities.

Besides, Red Hill Park often held some events, such as some temple fairs, folk exhibition activities during the Spring Festival, etc. Moreover, the end of December of every year, during the Ice and Snow Festival of the Silk Road, Urumqi would hold a variety of exciting ice activities such as ice sculpture exhibitions, skiing competitions, and other events. And Red Hill Park generally held an ice sculpture exhibition, ice garden party. 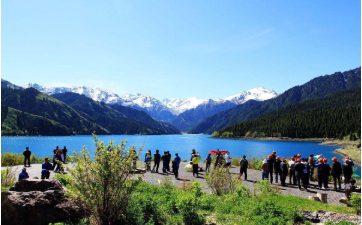 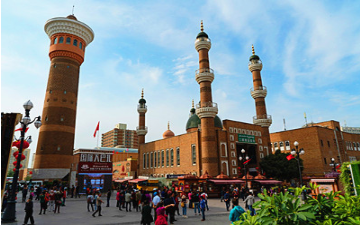