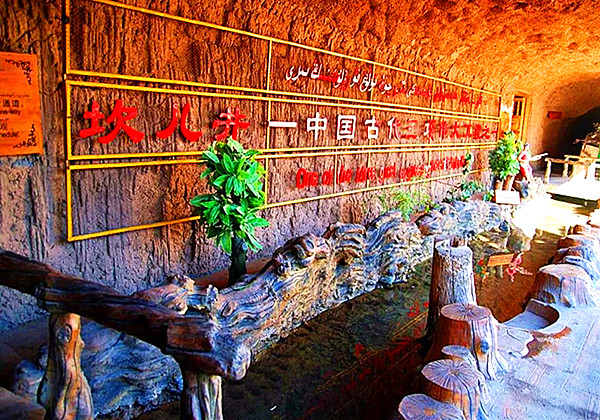 Karez Well, located around the city of Turpan in China's western region of Xinjiang, is an incredible example of an ancient irrigation system. Together with the Great Wall and the Grand Canal, it is reputed as one of the three major construction projects in ancient China, in which the history of this unique underground irrigation system can be traced back over more than 2,000 years.

Location: 6 km from the city center of Turpan, Xinjiang. 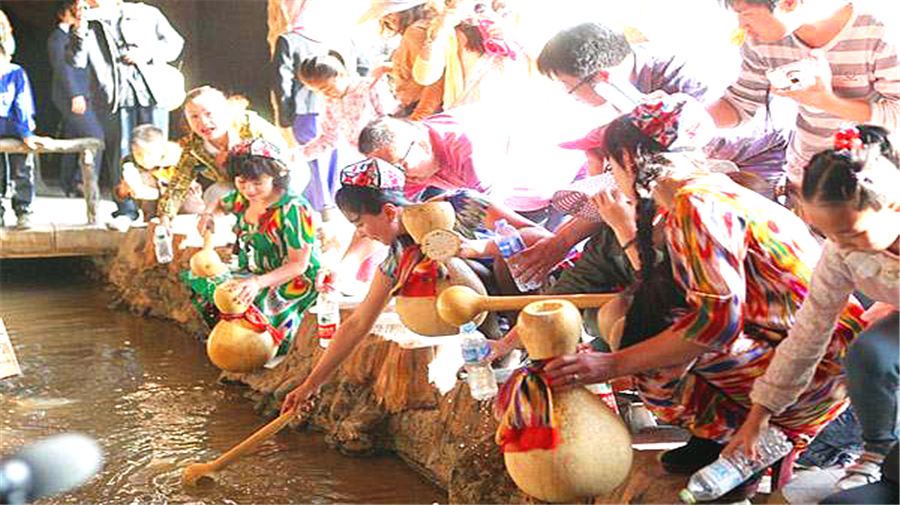 a. Take a bus to the Karez System Folkways Center

b. Take a taxi to the Karez System from Turpan City downtown

Travel tips: The visiting route is single and only forward in Karez Well System, so it is impossible to go back to take some missing photos or watch some missing details.

What to Visit in the Karez Well System

It's would be helpful to have a tour guide with you to introduce and and tell you about the exciting things in the Karez Well System, or the Karez Well may seems like any other wells to you.

The most popular site people visit when visiting Turpan the Karez Wells is the Turpan Karez Museum, which has not only pictures and models detailing the history of the Karez Well System but also real underground tunnels that you can walkthrough. Besides, there are two primary tourist spots called Karez Well Amusement Park, and Karez Well Folk Custom Garden where are interesting for traveling in Turpan. 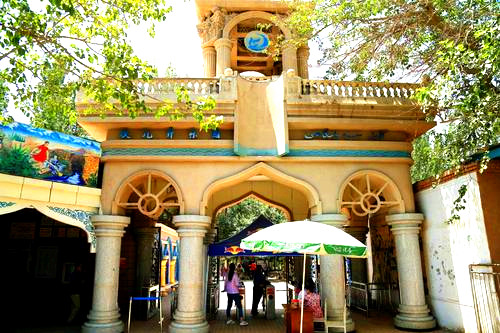 Why the Karez Well System Was Built

Karez Well System is a set of ancient wells built to connect an underground irrigation system that transported water from the Tianshan Mountains to the Turpan's desert oasis. You would see each of the wells linking the underground canals that bring water to the fields of Turpan if you were to take a cross-section of this series of Karez. The word "Karez" means "well" in the Uyghur language.

Karez System wasn't just about getting water for irrigation for those Uyghur living in the Turpan Depression, the second-lowest point in the world behind the Dead Sea, which was also the issue of blazing heat. The reality of evaporation was problematic and made above-ground irrigation channels impractical. A new method had to be developed to transport mountain runoff to the flat land.

So the ancient Uyghur people found a way to bring the water through underground canals. The Uyghur engineers were able to harness the power of gravity to move the water toward the city by digging at the shallowest part of the underground reservoir, fed by snowmelt from the nearby Tianshan. They constructed the underground channel using a series of shafts to dispose of the rock and ventilate the space.

The Importance of Karez Well System

Turpan is known as one of the hottest places on earth, which is almost certain that the Turpan would have disappeared centuries ago without this ancient irrigation system's ingenuity. The oasis town of Turpan would not exist if it is not applicable for the Karez Well System.

The system helped to make the Turpan area an oasis on the Silk Road route, and also helped to make Turpan a vital fruit and vegetable growing area in China. It is said that about 600 Karez were in use in 1949, and they supplied most of the water used for irrigation.

In modern times, however, concrete canals and ditches were built, pipes were installed, hundreds of wells were dug. It's hard to appreciate just how amazing this feat of engineering is until you understand how it was done.

How the Karez Well System Was Built 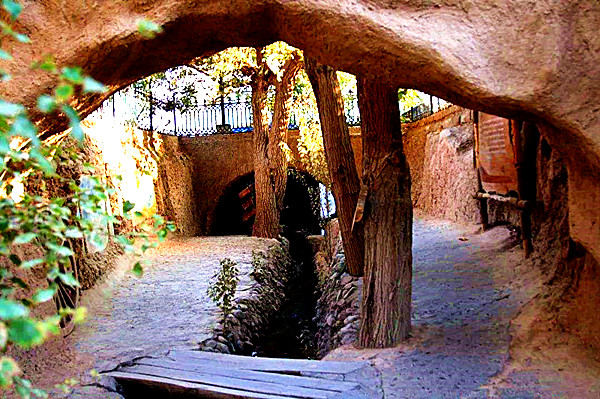 Where's the engineering genius in that the Karez are just a bunch of wells dug in the ground?

Hundreds of years ago, the locals built Karez wells when there was no pumped groundwater and no rainfall to fill a conventional well in Turpan. The most challenging part of building a Karez well system was to create a straight underground tunnel.

There is a distance of about 20 to 70 meters between every two vertical wells. The ancient Chinese people devised two ways of ensuring they were digging in the right direction and building straight underground tunnels ithout using a compass to set the right direction, avoiding twists and turns that would lead to erosion wasted effort.

The Structure of Karez Well System 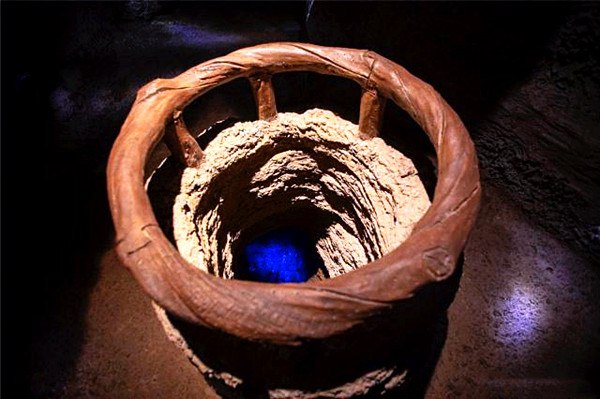 Karez Well is a unique irrigation system with an original structure, which consists of four parts: shaft, underground canal, open canal, and waterlogging dam. Bogda Mountains in the north of Turpan Basin and Karawucheng Mountain in the west of Turpan Basin have a large amount of snow and rainwater flowing down the valley in spring and summer and sneaking into the Gobi Desert.

People ingeniously created Karez wells to divert underground subsurface flow to irrigate farmland by using the slope of the mountain. Karez well does not evaporate a lot because of hot and strong wind, so the flow rate is stable, and self-flow irrigation is guaranteed.

The shaft is a passage for transporting underground sediment or silt when excavating or clearing the underground canal of Karez well, and also a ventilation vent. Generally, the closer the shaft is to the source, the deeper the shaft is. The deepest shaft can reach more than 90 meters. There are more than ten shafts and more than 100 shafts in a Karez well. The wellhead is usually rectangular or circular, 1 m long and 0.7 m wide. 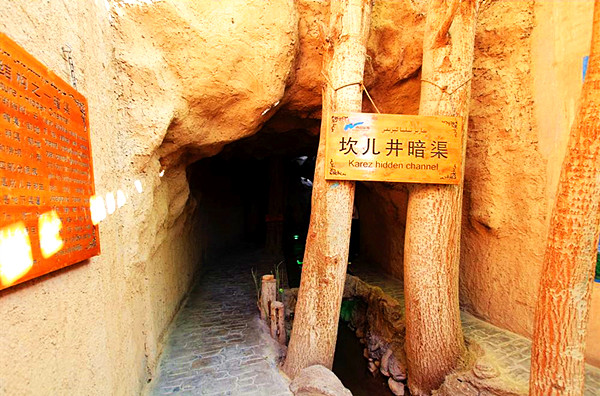 The main body of Karez Well is an underground canal; the function is to gather water in underground aquifer onto it. It is generally excavated from low to high on a particular slope so that water can automatically flow out of the surface. Underground canals are all excavated underground, so the excavation project is challenging. 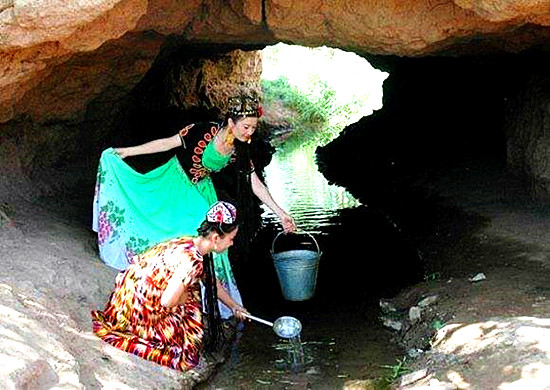 As the name implies, an open channel is a channel flowing on the surface of the earth. It becomes an open canal when the underground canal runs out of the ground. People have built water storage ponds with the function of water storage and regulation in certain places. These large and small water storage ponds are called waterlogging dams, where the water is stored and sent to them whenever needed.

Karez Well is an ancient irrigation system; it has ever played a significant role in daily life and the production of the people inTurpan. The function and position of the system can not be superseded completely, even if there is a highly advanced electromechanical irrigation system. The 4th Standing Committee of Turfan Municipal Peoples Congress proved Provisions on the 3rd Session of Administration of Turfan Karez Wells on May 25, which shows that its authenticity and integrity can be well preserved in the future.