The White Horse Tower has nine floors, symbolizing that the White Horse was 9 years old when it died. The White Horse Tower is octagonal in shape and is built with bricks. Each corner is 3 meters wide; the 2-4 layers are folded and overlapped; the 5th layer has protruding milk nails, circled around, and the upper is upside lotus petals; the 6th layer The tower body is covered with a bowl; the 7th floor is in the shape of a wheel of Faxiang; the 8th floor is a hexagonal slope brake disc, with one wind duo on each corner; the 9th floor is a bead-shaped spire, and the whole tower is in the style of a Ming Dynasty Lama . 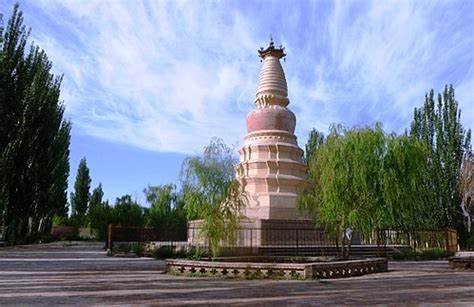 Location:：Located in the south of Dunhuang Old Town, the western suburb of Dunhuang City, in Baimata Village, Danghe Township, 2 kilometers away from the city center.

Transportation： Baima Tower is only 2 kilometers away from the downtown area of Dunhuang. It can be reached by taxi or by renting a bicycle.

Introduction to the scenic spot

Dunhuang White Horse Pagoda was built in 386 AD. According to legend, it was a stupa built to commemorate the white horse that died when the monk Kumarajiva spread Buddhism in the Northern Liang Dynasty and passed through the city of Dunhuang.

According to legend, in September of the eighteenth year of Jianyuan Qin (382 years), Emperor Fu Jian ordered Xiaoqi General Lu Guang and Lingjiang General Jiang Fei to lead 70,000 troops to Kumaruzi, and ordered: A deep understanding of Dharma, good leisure of yin and yang, is the ancestor of the later learners, and thinks deeply. The great treasure of the sages, Ruokqiuzi, that is to send Shishi." Lu Guang is equal to 384 years to break the Qiuci, and conquered the Western Regions for more than 30 years. After the country, he got more than 2,000 camels and countless treasures of cultural relics. When he traveled to Dunhuang, Kumarajiva night dream of the white horse on which he rode Tomeng said that the white horse was originally a dragon horse from the upper realm. Now that it has entered Yangguan Avenue, the horse will be beyond the place of life and death, and there will be another ride to the Hulu River. When I woke up the next day, the white horse was already dead. The local Buddhist believers buried the white horse under the city and built the tower to commemorate it, named "White Horse Temple". 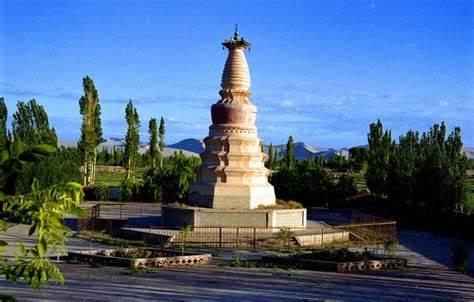 Mata is located in the east corner of Shazhou Ancient City, Dunhuang City, Gansu Province. It was built in the Later Qin Dynasty, and the current tower was rebuilt in the 24th year of Daoguang in the Qing Dynasty (1843-1844 AD). The existing Baima Tower is majestic, with 9 floors, 12 meters in height and 7 meters in diameter. The base layer is octagonal; it is built with bricks, each image is 3 meters wide; the 2nd to 4th layers are folded and overlapped; the 5th layer has protruding milk nails, which are circled around, and the upper is upside lotus petals; the 6th layer is Covering the bowl-shaped tower body; the seventh floor is in the shape of a wheel of Faxiang; the eighth floor is a hexagonal slope brake disc, each corner is hung with a wind duo; the ninth floor is a continuous bead spire, and the overall tower is in the style of the Ming Dynasty Lama Tower.

Baima Tower is only two kilometers away from the downtown area of Dunhuang, so you can take a taxi or rent a bicycle to go there. Opening hours: 08:00 to 18:00. Lanzhou Hongyun Hotel is a two-star hotel for foreign tourists. It is located on the north side of the Railway Bureau Plaza in the bustling commercial area of the city, close to the railway station, and is very convenient for shopping and transportation. The hotel has a variety of suites such as deluxe suites, standard rooms, single rooms, and triple rooms. The restaurant has luxurious private rooms, lounges, banquet halls, seafood, dishes, and unique features. The hotel also has recreational facilities such as singing and dancing halls, karaoke halls, saunas, foot baths, beauty salons, bars, chess board rooms, etc.; and provides guests with services such as postal, fax, ticket booking, and air tickets. The hotel has newspapers, ticket reservations, and meal delivery services. The hotel is 70 kilometers away from the airport; 3 kilometers away from the railway station; 2 kilometers away from the city center.

Dunhuang Stuffed Peel, some of Dunhuang Stuffed Peel is bright yellow, and some are as smooth as jade. It tastes hot and sour after being mixed with special seasoning, flexible and refreshing, and easy to eat. It is a very common folk snack and local fast food. Stuffed leather is a kind of wheat flour product. When making it, first add water and homogenize the flour, then put the dough in clean water to stir and knead, so that the starch in the fabric is fully separated from the protein, leaving the protein, commonly known as gluten. The flour paste dissolved in water is the raw material for processing the noodles. After the water boils, scoop the batter into the iron plate and spread it evenly. Put it in boiling water and boil for a few minutes. The batter becomes a cake and becomes a stuffed crust. Then cut the pie-shaped stuffed skin into thin strips, put a few slices of gluten, add a little mustard, garlic juice, chili, sesame oil, etc. before eating. 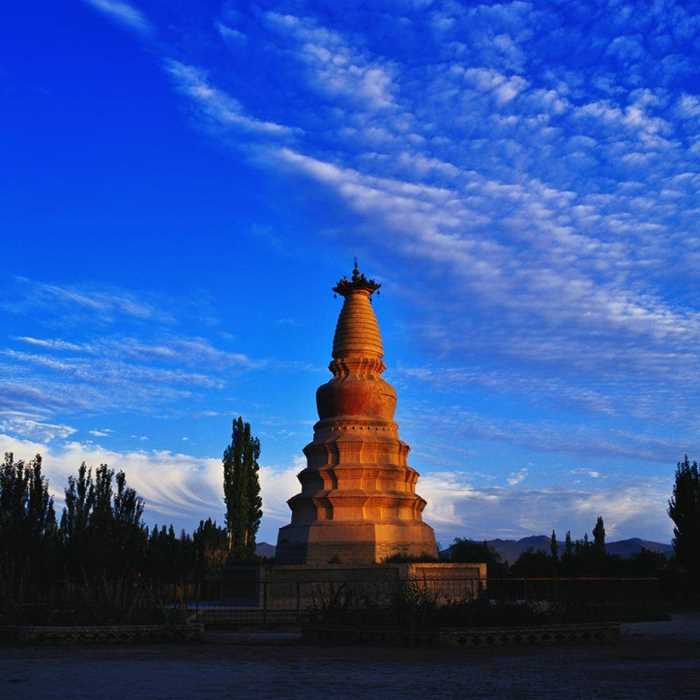