As one of the splendid flower fairs in China, Luoyang Peony Flower Festival has been listed as the national intangible cultural heritage. Nowadays, Luoyang Peony Flower Festival has become one of the indispensable grand festivals, and it is also a major platform for a foreigner to understand the custom and culture of Luoyang. The appreciation of peonies has a long history in China. Of all ages, Chinese artists and poets created numerous masterpieces about its exquisite beauty. Hence, it is awarded the title of "King of Flowers." 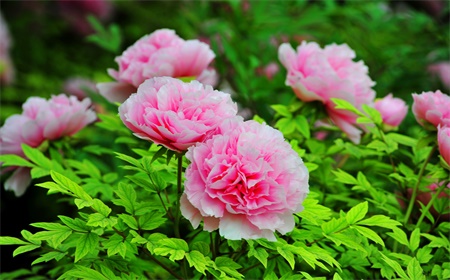 The peony cultivation was prosperous during the Tang Dynasty (AD 618—907) and Song Dynasty (AD 960—1279), as the Luoyang City became famous for its local peonies. A writer from the Song Dynasty, Ouyang Xiu, even wrote an article called "Records of Luoyang Peony" to praise the beauty of Luoyang peonies.

As a professional peony flower garden, the National Peony Garden is located in the northern suburb of Luoyang. The flower fair is opened to the public every April (the blooming period of peony flowers), but it does not accept any tourists for the rest of the year. Peony Garden is divided into the South and the north, the famous Sui Dynasty Xiyuan relic "Millennium Peony King" is located in the south of Peony Garden. When visiting the Peony Garden, you can walk around every corner of the park according to the signs in the park.

During the period of the public opening, visitors can enjoy the variety of peonies in the park. The peony flowers in the garden are usually red, yellow, Milky yellow, white, and purple, pink with blue and so on. Which is quite magnificent and aroma. In the south area, visitors can also see the relic of the Sui Dynasty, the "Millennium Peony King", which is known as the "living fossil" of Luoyang peony. The Peony Garden is full of private garden style in Song and Ming Dynasties, in this private garden, you can see the ancient pavilions and pavilions, green corridors, artificial waterfalls and streams to name just a few. Peonies are not only cultivated in Luoyang City, so why was Luoyang City the only region becoming famous for its peonies? The reason has a lot to do with the two perspectives: natural and cultural.

The peony thrives in warm, dry places with plenty of sunshine and fertile soil. Luoyang City belongs to central China's Henan Province, which has several rivers that bring alluvial soil with many microelements. Hence peonies that grow there can blossom beautiful flowers. Ouyang Xiu stated this in his "Records of Luoyang Peony" that Luoyang provides a suitable environment for peonies.

In the history, Luoyang was one of the cradles of Chinese civilization. It was believed to be the capital of 13 dynasties and witnessed the life and death of 105 rulers. Luoyang peonies attracted many royal aristocracies like the Tang Empress Yang Yuhuan, as they considered the big, fragrant flower of the Luoyang peony as a representative of wealth and elegance. This impression of the peony is engraved in the history of Luoyang City, and gradually tied the city and the flower together.

Nowadays, the peony is still an essential part of Luoyang's culture. Each year from mid-April to mid-May when the peonies are in full bloom, Luoyang City will hold the Luoyang Peony Festival to celebrate the blooming season of this flower with numerous tourists. With the development of China, new interpretations have been added to the cultural meanings of the peony. It is still the representative of elegance and wealth, but it also represents a good wish of Chinese people to the splendid future life. Please read more about Luoyang Climate.