Kyrgyzstan is a nation defined by its natural beauty. Joyously unspoiled mountainscapes, stark craggy ridges and rolling jailors (summer pastures) are brought to life by semi-nomadic, yurt-dwelling shepherds. Add to this a well-developed network of homestays and visa-free travel, and it's easy to see why Kyrgyzstan (officially the Kyrgyz Republic), is the gateway of choice for many travelers in Central Asia.

The terrain of Kyrgyzstan is changeable, with both pleasant and pristine mountain scenery and desolate ridges. The semi-nomadic people living in felt houses have created herdsman culture and brought vitality to the constantly shifting summer pastures. In addition to natural beauty, there is a comprehensive home-stay network. As you think, 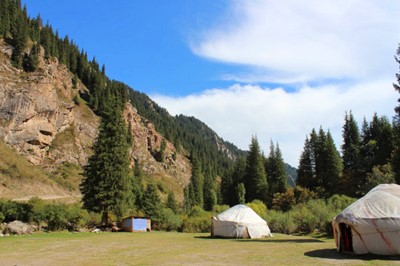 most of the country's attractions are located in the countryside and high altitudes, so the time to travel is crucial. For hikers, summer travel is ideal and the road is generally easier to walk. In midsummer, tourists from Kazakhstan and Russia gather on the frozen Issyk-Kul Lake coast. From October to May of the following year, many rural accommodations will be closed, and the felt houses dotted with mountain views will disappear. So when you choose to travel in winter, you must consider it carefully, unless you are here for skiing.

The Kyrgyz, a Muslim Turkic people, constitute more than half the population. The history of the Kyrgyz in what is now Kyrgyzstan dates at least to the 17th century. In modern times, the Kyrgyz people have seen much of their land taken by Russians as the Russian empire spread east. From 1917 to 1991, the Kyrgyz lived in the Soviet Union as residents of the Kirghiz Soviet Socialist Republic. With the collapse of the Soviet Union, the Kyrgyz people became independent and created their own country.

Where is Kyrgyzstan Located

There are approximately 2.5 million Kyrgyz living throughout the former Soviet Union, about 88 percent of them in Kyrgyzstan. Ethnic Kyrgyz constitute slightly more than half of the population of Kyrgyzstan.

Kyrgyzstan, country of Central Asia. It is bounded by Kazakhstan on the northwest and north, by China on the east and south, and by Tajikistan and Uzbekistan on the south and west. Most of Kyrgyzstan's borders run along mountain crests. The capital is Bishkek (known from 1862 to 1926 as Pishpek and from 1926 to 1991 as Frunze). The largest mountain lake, Issyk-Kul, is located high in the mountains of eastern Kyrgyzstan. Many Kyrgyz fishing villages are located around the edge of the lake.

Top Things to Do in Kyrgyzstan

We will share the favorite things to do in Kyrgyzstan with you. There are not many tourist places in Kyrgyzstan, so be prepared for a wild adventure!

The Most Popular Attractions

You must visit the Issyk-Kul-Lake is the second largest alpine lake in the world after Lake Titicaca (South America). More than 170 kilometers long and 70 kilometers wide. 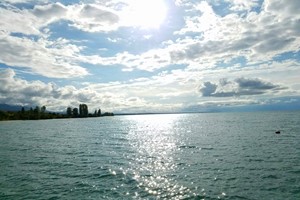 Although the altitude of the lake is as high as 1600 meters, the depth, heat, and salinity of the lake ensure that the lake is not frozen all year round, even in the cold winter of Central Asia. The mysterious and gentle lake water creates a lasting mild microclimate.

Walking at the Ala-Too Square is the central square of Bishkek and the main square of the country where the White House, the State History Museum, the flagpole with the national flag, the monument to the victims of the revolution on April 7, the statue of Chingiz Aitmatov and the statue of Manas, the hero of the Kyrgyz folk epic, are located.

From Bishkek to Issyk-Kul, you can pay a visit to the Burana Tower. You can climb the tower, or head northwest from the alpine meadow, and use the distant mountains as the curtain to appreciate its slightly inclined structure.

The Tash Rabat is located somewhat east of the main north-south highway. To the south is Lake Chatyr-Kul and Torugart Pass. To the north is Koshoy Korgon, a ruined fortress of uncertain date. The area is a center for hiking and horse-trekking. See more about Top Kyrgyzstan Attractions

Bishkek's main department store, also has a decent selection of local crafts and souvenirs on its fourth floor. See more 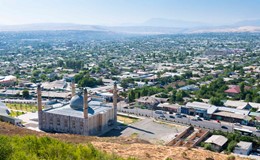 The Central Asian staples can be found all over Kyrgyzstan and as good as some of it is you may crave something else after a while. Bishkek has a wide variety of restaurants serving everything from western fast food to Italian, Chinese and Japanese cuisine. So if you want a break from the local delicacies then this will be the place to get your fill.

Travelling in Kyrgyzstan is getting easier every year, but it still requires an adventurous spirit and a bit of patience due to the lack of infrastructure outside of Bishkek. To help you make the most of your trip, we are going to share with you some of my best Kyrgyzstan travel tips.

Bishkek has by far the best nightlife in the country. Both Russian and European operas and ballets are performed at the State Opera and Ballet Theatre. The Russian Drama Theatre has Russian-language productions, while the State Academic Drama Theatre stages work in the Kyrgyz language. The State Philharmonic hosts classical music concerts as well as pop and folklore events. Bishkek also has many discos and nightclubs. These are best approached with caution as drunken attacks on foreigners are not unheard of.

Elsewhere in the country. things are very quiet at night, although some restaurants turn into dancehalls in places like Karakol or Naryn after nightfal.