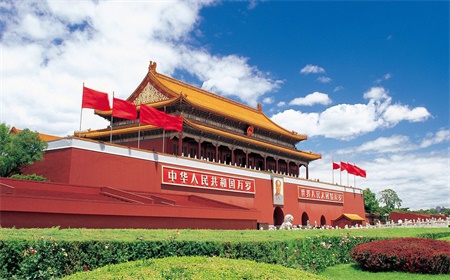 Tiananmen Square is one of the most attractive places in Beijing, Tian'anmen Square is the spiritual heart of the world's most populous country. It earned this distinction by serving as the stage for momentous historical events, like the demonstrations on May 4th 1919 that inspired young Chinese to fight imperialists and warlords, and build a strong independent country. Among those swept up in the ferment of the"May Fourth Movement" was Mao Tse-tung who would help found the Communist Party of China two years later.

On 1st October 1949, Chairman Mao climbed atop the"Gate of Heavenly Peace", which gives the square its name, to proclaim the foundation of the People's Republic of China.

The History and Activities: 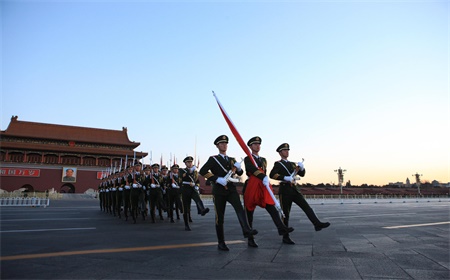 In 1949. Tian'anmen Square was a narrow walled plaza, but it was expanded in the 1950s to its present size of 99 acres or 4.300000 square feet. The site of major parades, the square has also played host to impromptu celebrations as when Beijing was awarded the 2008 Olympic Games in July 2001. Most days Tian'anmen Square is filled with sightseers and kite flyers. During national holidays, it's usually festooned with banners and floral decorations. Many Chinese visits at dawn or dusk to see elite People's Liberation Army troops conduct flag raising or lowering ceremonies.

Gate of Tian'anmen, which leads towards the Forbidden City. Above the gate hangs the famous portrait of Chairman Mao. On both sides of the gate are inscriptions in Chinese: the one on the left says, "Long Live the People's Republic of China"; the one on the right declares, "Long Live the Unity of the People of the World." For a panoramic view of the square, ascend to the top of the Gate, where Mao proclaimed the establishment of the PRC.

The Centre of the People Square:

In the centre of the square is the 131-foot-high (40-m) Monument to the People' Heroes, an obelisk with friezes depicting revolutionary heroes and calligraphy by Mao Zedong and former Premier Zhou Enlai. South of the monument is Chairman Mao's Mausoleum, where you can peer at the embalmed figure of the Great Helmsman in his glass casket. Standing guard over the square's southern end, behind the mausoleum, is 600-year-old Qianmen, one of the few remaining Ming-era city gates. The building on the square's east side houses the National Museum of China.

The West Side of Tian'anmen Square: 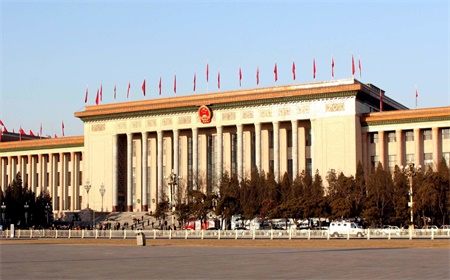 The Great Hall of the People

The imposing edifice on the west side of Tian'anmen Square is the Great Hall of the People. Built-in a speedy 10 months in 1958 to 1959, it's home to China's parliament, the National People's Congress. People with a sense of grandeur will enjoy visiting the Great Hall's 5,000-seat banquet room and 10.000-seat auditorium, which has a large red star on the ceiling outlined by 500 light bulbs. The National Theater, a futuristic "bubble" of titanium and glass resting on an artificial lake is being built on a site directly west of the Great Hall of the People.

How to get to Tian'anmen Square