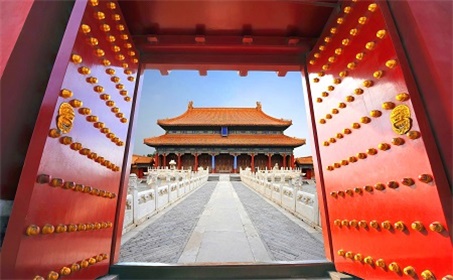 The abode of 24 Ming and Qing emperors of the Celestial Empire, the Forbidden City in central Beijing currently is home to the Palace Museum, which was established in 1925. For almost five centuries, it served as the home of the Emperor and his household, and the ceremonial and political centre of the Chinese government.

The palace was built from 1406 to 1420, the complex consists of 980 surviving buildings with 8,707 bays of rooms and covers 720,000 square metres. The palace complex exemplifies traditional Chinese palatial architecture and has influenced cultural and architectural developments in East Asia and elsewhere. The Forbidden City was declared a World Heritage Site in 1987 and is listed by UNESCO as the largest collection of preserved ancient wooden structures in the world.

Besides its massive scale and historical significance, the Forbidden City strikes any visitors by its design. Its clean lines, perfect proportions, and dramatic colour scheme of vermilion walls, white marble terrace and staircases and brilliant yellow-tilted roofs create one of the world's most architectural complexes. It was built a meridian line: from the Dragon's an axis can be drawn directly south through the many gates, right through to Qianmen. From his northern seat, the emperor could symbolically survey his entire kingdom.

The main entry point for the Forbidden City is the Meridian Gate which is a ten-minute walk due north from Tian'anmen Square. Don't confuse Meridian Gate with the Gate of Heavenly Peace, above which hangs Mao's portrait The "Son of Heaven. as the emperor was called. would come to the Meridian Gate to review armies and announce the new calendar. As you walk through Meridian Gate, keep in mind that in imperial times you would have been guilty of a capital offence - only the emperor could use this central archway. Officials and royal family members had to employ the side passageways.

Beyond the Meridian Gate is a courtyard bisected by a canal in the shape of a bow that's spanned by five marble bridges. On the far side of the canal is the Gate of Supreme Harmony, which opens up to a second gigantic courtyard that held audiences of 100,000. On the north end of that courtyard is the first of three great ceremonial halls, the Hall of Supreme Harmony. This is where the Emperor read important edicts, celebrated his birthday and appointed military leaders. Inside the hall is an elaborately decorated throne flanked by cloisonne cranes (symbolizing longevity) and gorgeous columns carved with dragons. 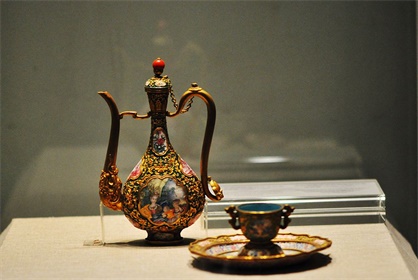 The Hall of Preserving Harmony

The second ceremonial hall called the Hall of Middle Harmony was used by the emperor and his ministers as a staging area to prepare for official ceremonies. Directly behind it is the Hall of Preserving Harmony where Qing dynasty New Year's Eve banquets were held. This edifice was also used as an imperial examination hall for top scholars seeking official positions.

After passing the Hall of Preserving Harmony, some visitors pause over a cappuccino at the Forbidden City's Starbucks while others meander eastward in an area that served as the quarters for imperial attendants, including, at one point, an estimated 70,000 eunuchs. There are signs pointing towards the Hall of Clocks and Hall of Jewelry, where antiques are exhibited.

Due north of the Hall of Preserving Harmony is the Inner Palace, the series of elegant buildings and courtyards where the emperor lived with his family and concubines. In addition to a throne room and nuptial chamber, the buildings include libraries, temples and a theatre. At the northern end of the compound is the Imperial Garden with gnarled cypresses scholars'rocks and pavilions. Reflecting their separate purposes, the Garden and the Inner Palace were built on a far more human scale than the grandiose ceremonial halls: the former was designed for the emperor's private life, the latter for his public persona as the embodiment of the state and Son of Heaven. The garden is also the only place in the palace grounds that have trees because of the importance of symbolism to the emperor. The palace grounds are in the shape of a square -think of them as the box. If the box has the Chinese character for tree inside, it becomes the character meaning imprisoned, not exactly an auspicious symbol for the emperor.

To the north of the garden is the exit via the north gate. Be sure to take in the spectacular view of the Forbidden City's moat, outer wall and corner guard towers. If you want an even better view, cross Jingshan Qian Jie and climb to the top of Coal Hill.