The Bell Tower of Xi'an, built-in 1384 during the early Ming Dynasty, is a symbol of the city of Xi'an and one of the grandest of its kind in China, which also contains several large bronze-cast bells from the Tang Dynasty. 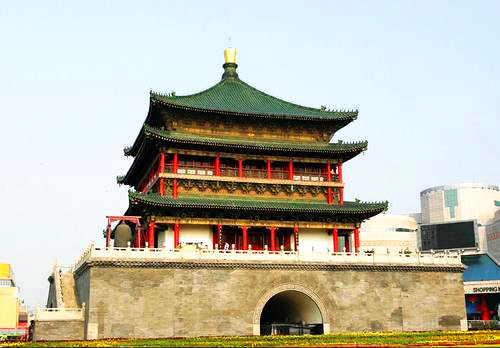 Location: at Lianhu District Junction of the center of Xi'an city

Best Time to Visit: All year round, as it is indoor, especially in Autumn and Spring, while the climate is comfortable.

What to Visit in the Bell Tower 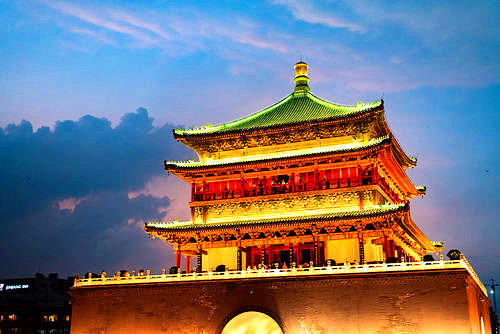 Visitors can reach the terrace where the wooden Tower sits to get a bird's eye view of the surrounding area, to the Bell Tower after climbing many stairs. There is a small museum that houses a huge bell inside the Tower, as well as some handwritten memos about the relocation and renovation of the Tower. There are also bell and chime performances at various times throughout the day.

The Bell Tower is an iconic landmark of Xi'an, receives many tourists, and there may be long lines. Most visitors find the exterior of the Bell Tower is more impressive, especially in the evening when it is illuminated with colorful lights, while people pay a small fee to go upstairs and visit the Tower's interior. Since the Tower is quite tall and prominent, you can quickly appreciate it for free from across the road.

Fuction of the Bell Tower

Ancient Chinese cities were also military castles. In addition to build walls around the city, dig moats and set drawbridge, it also accompanied with the bell tower in the city center as a command center. It was used for reporting time at peacetime, and so could the drawbridge opening and closing on time. And it was used as city defense command at the state of siege.

Architecture & Structure of the Bell Tower

The Bell Tower stands on a brick base 35.5 meters long and 8.6 meters high on each side, is the largest and best-preserved of its kind in China. During the Ming Dynasty, Xian, a fact reflected in the size and historical significance of its Tower, was an essential military town in Northwest China. 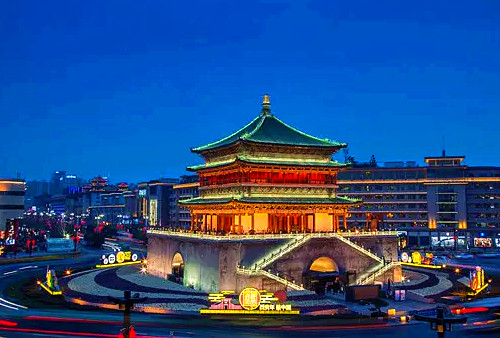 The Bell Tower has three layers of eaves but only two stories. Inside, a staircase spirals up. The grey bricks of the square base, the dark green glazed tiles on the eaves, gold-plating on the roof, and gilded color painting make the Tower a colorful and dramatic masterpiece of Ming-style architecture. The three layers of eaves reduce the impact of rain on the building except for enhancing the beauty of the building.

The northwest corner of the Tower initially housed the famous Jingyun Bell from the Tang Dynasty. Legend has it that although nothing had changed in the Tower, the Jingyun Bell fell silent during the Ming Dynasty, so the current bell, a much smaller one weighing only 5 tons, was cast. The original Jingyun Bell can now be seen in the forest of Stone Steles Museum. The engravings on the Tower doors reflect the decorative fashion of Ming and Qing Dynasties, recounting popular stories of ancient China.