● Border transfer from Uzbekistan to Turkmenistan, discover the stunning natural wonders and distinctive architecture of Turkmenistan

● Visit the famous Ahalteke horses at the Horse Farm in Turkmenistan

● BBQ dinner and Camp Accommodation at the burning Gas Crater

● Visit the Nissa fortress - the Sanctuary of Parthian Kings, a world heritage declared by UNESCO in 2007

● Discover a small desert village when crossing the Karakum desert

● Travel to Kunya Urgench to find the ancient ruins, mausoleums and minarets 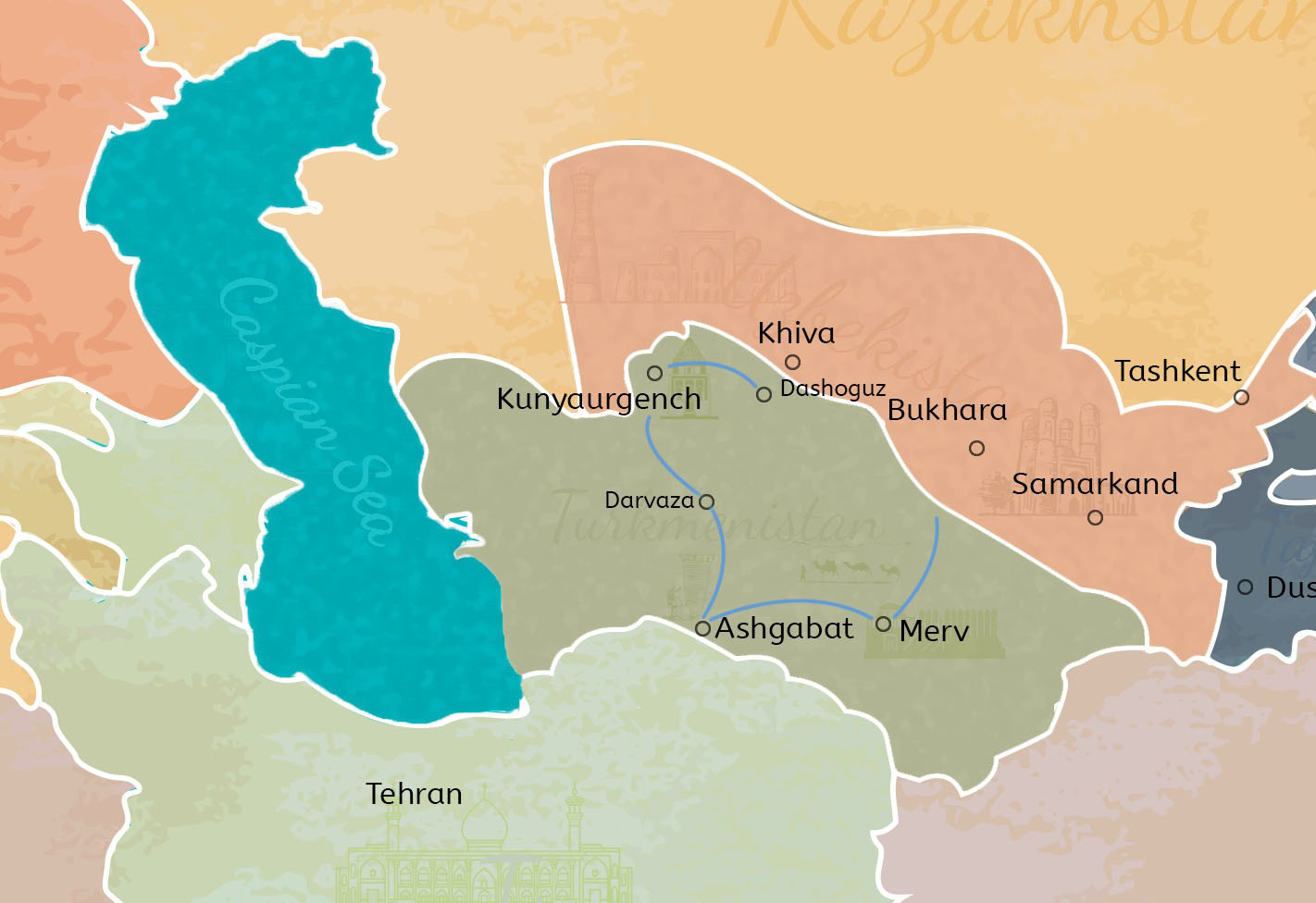 Day 1Shavat Border pick up, then sightseeing in Kunya Urgench

Afternoon drive to Darwaza burning Gas Crater (3.5 h) The Crater is also called as "The Door to Hell". The area is rich in natural gas. While drilling in 1971, former Soviet geologists tapped into a cavern filled with natural gas. The ground beneath the drilling rig collapsed, leaving a large hole with a diameter of 60m and 20m deep. To avoid poisonous gas being discharged, they decided to  burned it off. The geologists had hoped the fire would be put out in several days, but the gas is still burning today. In the evening, it is cool to watch the spectacular and fascinating view of the gas crater.

Day 2Drive to Ashgabat via the desert village Erbent

BF at the camp. Morning drive to Ashgabat (3.5 h). En-route we cross Karakum desert, will stop in a small desert village Erbent.

Arrival in Ashgabat and free time.

Later to Horse hippodrome to see a national pride of Turkmen people - Akhalteke horses, the nicest horses in the world. 5000 years ago, the Turkmen begin to breed Akhalteke horses. The World's unique breed was never mixed with other breeds. Emperors like Alexander the Great, Darius I desired to own Ahalteke horses. By superstition, every sick person who touches an Ahalteke horse will get well soon.

In 2013 the Guinness Book of Records named Ashgabat “white marbled city” – here you can see the biggest number of structures in the world made out of the white marble. You will see Presidential Palace, Ruhyyet Palace, Wedding Palace, modern “Yildyz” Hotel, Ferries Wheel, Constitution Monument, Arch of Neutrality, Monument and park of Independence, Ertogrul Gazy Mosque, Ashgabat Sports and Housing facilities, the Earthquake and victims of WWII Monuments.

Day 4Fly to Mary and Visit the ancient Merv, then transfer to Farap Border