The historic town of Samarkand, located in a large oasis in the valley of the Zerafshan River, in the north-eastern region of Uzbekistan, is considered the crossroads of world cultures with a history of over 2,500 years, linking China, India and the Persian Empire. 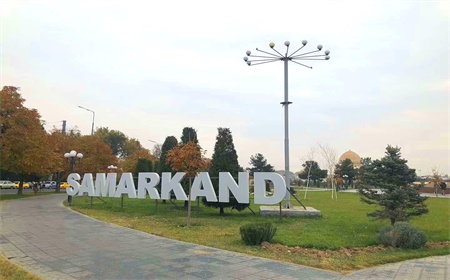 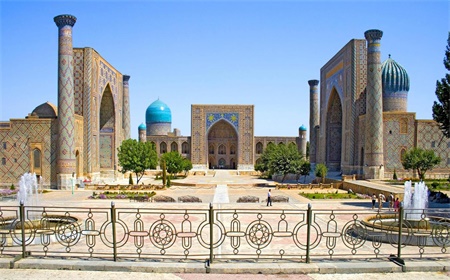 As one of the oldest cities standing in Central Asia, today's Samarkand is the country's second-largest city. Samarkand was inscribed as UNESCO-World Heritage Site in 2001 as living monuments to these past interactions.

People of Sugda, famous for running businesses, built this city into a prosperous commercial and capital. UNESCO described Samarkand's most significant period was in the Timurid period "from the 14th to the 15th centuries when it was capital of the powerful Timurid realm."

Where to visit in Samarkand ?

The majestic blue domes of the Bibi-Khanym Mosque are the unusual sight. It takes one's breath even from understanding the scale of construction of this monument, impressing with its size and beauty. In antiquity, the dome of this mosque was compared with the dome of heaven and the arch of the portal - with the Milky Way.

Bibi-Khanym Mosque was constructed as the cathedral mosque of Samarkand-ie the main mosque of Temurid Power-in the early 15th century. The best architects, artists and craftsmen from conquered countries were involved in the construction of this grandiose complex and continued working for five years, Indian elephants were used for heavy lifting and transporting. When Temur returned after his western campaign he was disappointed with the scale of construction and ordered the reconstruction of the portal. They made it 45 m. high with big pylons and minarets flanking the arch up to 60 m. The bronze gates installed at the front entrance produced a long musical sound, Those unique gates were taken as trophies by the Iranian Nodir-Shah who invaded Samarkand in 1740. Then they were returned and later melted down for coins. The large yard of the mosque (129x99 m)was laid with marble stones. It was for the thousands of believers coming for prayer.

The structure of Bibi-Khanym Mosque

In the centre of the yard, there was a pavilion for ritual ablutions. Now a marble lectern for the huge Koran stands there. It was made in the time of Ulugbek and decorated the interior of the main building. The yard was fringed by an arch and dome gallery placed on four hundred marble columns. There are three constructions with domes on its axis-the main mosque with a rostrum (minbar) for the imam in front of the entrance portal and two small mosques on both sides. The mosque was so gigantic that the brick design could not bear its own weight and during the first decades, the mosque was collapsing little by little. The mosque of the 15tn century came down to us in the ruins of a powerful entrance portal three dome buildings and a minaret in the corner. Conservation and partial restoration of the mosque were completed in the late 19th-early to early 21st centuries.

The legend of Bibi Khanym Mosque

As well as all Samarkand monuments the Bibi Khanym Mosque also has the beautiful legend. According to it, the formidable ruler built the mosque in honour of his favourite wife Bibi Khanym. After a successful campaign to India Temur decided to build the biggest building of the East – the mosque – which should have exceeded all mosques of the world by its size. Sparkling walls, high minarets, a wide portal of the mosque, decorated with carved marble, must have praised for centuries the name of Temur and his beloved wife.

Registan became the central square of Samarkand in the 14th century. The word "Registan" can be translated as "a sandy place." Earlier there flowed a canal forming sand and silt deposits. The sacred Mausoleum of Imam Muhammad ibn Djafar (9th - 10th century) was built here in the time of Samanids, which explains the choice of the place. Six streets crossed at Registan. In the time of Temur, Registan was connected with the citadel of Samarkand by"Silver rows" street. A dome shopping mall tim Tilpak-Furushon was built at the crossroad, on behalf of Temur's wife Tuman-aga. Under Mirzo Ulugbek, Registan became the main official city square where military parades were held and the ruler's decrees announced. Ulugbek constructed a majestic madrasah and Sufi khanaka with a huge dome. By the 17th century the old buildings of Registan were collapsing and the governor of Samarkand, Yalang-tush-by, built Sher-Dor madrasah instead of Ulugbek's khanaka and later the Tillya-Kari Madrasah.

The Ulugbek Madrasah was built between 1417 and 1420. Its huge entrance portal is decorated with a 15-metres arch. A mosaic panel above the arch depicts a symbolic sky with five and ten-pointed stars. The Madrasah's size is 56x81 m. Inside there is an open yard (30x40 m) with an octagonal tower in the centre. The madrasah had a platform for astronomical observations made before Ulugbek's observatory. The madrasah had fifty cells for one hundred students. Sheikh Khadja Ahrar and the poet Abdurrahman Djami were among the outstanding graduates of the madrasah. In the 18th century, the second floor and the domes on the sides were dismantled. By the 20th century most of the mosaic decoration on the facades had been lost, so the outstanding monument needed extensive restoration work. In the 20th century, the northeastern and southeastern minarets were repaired, new domes installed, the portal arch and tympan restored.

Spring to Summer is the best time to travel to Samarkand. Among them, Samarkand features a Mediterranean climate that closely borders on a semi-arid climate with hot, dry summers and relatively wet, variable winters that alternate periods of warm weather with periods of cold weather. July and August are the hottest months of the year with temperatures reaching, and exceeding, 40 °C. Most of the sparse precipitation is received from December through April. January 2008 was particularly cold, and the temperature dropped to −22 °C.