● Visit the well-known Potala Palace in Lhasa, which is the most outstanding representative of thousands of Tibetan Buddhist temples and palaces.

● Explore about traditional Chinese religious culture and get spiritual strength in the Jokhang Temple - a spiritual center for Buddhists in Tibet and it is the most brilliant architecture in Tibet during the Tubo Period.

● Watch the monks debate and explore more about the famous Sera Monastery, which was one of the “three great” Gelug monasteries of Tibet and was founded in 1419.

● Visit the largest monastery in the world - Drepung Monstery; it is one of the six temples of Gelug Sect of Tibetan Buddhism. 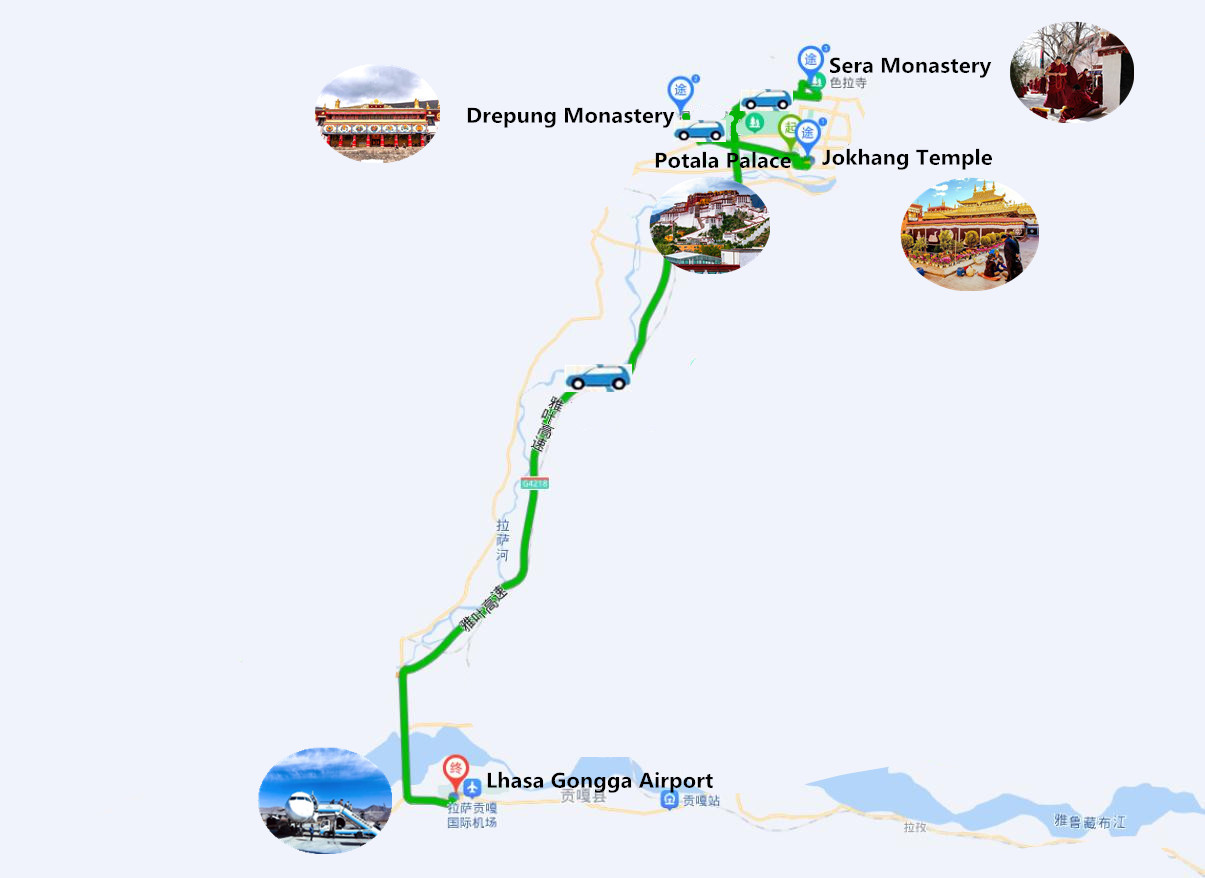 Day 1Your Destination to Lhasa

Welcome to Lhasa! It can be said that Lhasa is a city with both human and natural landscapes. Lhasa is the capital of China's Tibet Autonomous Region and the political, economic, cultural and religious center of Tibet; it is also the holy land of Tibetan Buddhism. Lhasa is located in the middle of the Tibetan Plateau and the north of the Himalayas, with an altitude of 3650 meters. After arriving in Lhasa, local tour guide will welcome you at the airport/train station, then transfer the guests to the hotel. Acclimatize the high altitude in the hotel.

Lhasa has sunny weather throughout the year with little rainfall. There is no severe cold in winter and no intense heat in summer; the climate is pleasant. The annual sunshine time is more than 3000 hours, which is known as the "sunshine city". The tour will begin from UNESCO World Heritage site - Potala Palace, which is also the winter palace of Dalai Lama. It's situated at 12,139 feet above sea level. It's a 13-story high building that contains over 1,000 rooms, various statues, stupas, murals and artifacts. Potala Palace is located on the Maburi mountain in the northwest of Lhasa city. It is a palace-castle style building complex. It was originally built by Zanpu Songzanganbu of Tubo Dynasty to marry Princess Wencheng. Potala Palace is an outstanding representative of Tibetan architecture as well as the essence of ancient Chinese architecture. The architectural art of Potala Palace is the most outstanding representative of thousands of Tibetan Buddhist temples and palaces. It is a unique example in China and even in the world. In addition, about 200 cultural relics in the Potala Palace treasure museum are on display, including letters of patent, seals, gifts, documents and classics, palm leaf scriptures, statues of Buddha, Thangka, magic tools, etc. Therefore, you can explore more about traditional Chinese culture and religious culture and also can get spiritual strength in this unique holy land.

Then continue to Jokhang Temple, another UNESCO World Heritage site. It's a spiritual center for Buddhists in Tibet. Located in the center of the old urban area of Lhasa, it is a Tibetan Buddhist temple built by Tibetan king Songzanganbu. The reason why Lhasa has the reputation of "holy land" is related to this Buddha statue. Jokhang Temple has a history of more than 1300 years and has a supreme position in Tibetan Buddhism. Jokhang Temple is the most brilliant architecture in Tibet during the Tubo Period, and it is also the earliest civil structure architecture in Tibet. It has created the Tibetan Pingchuan style temple Municipal Bureau style.

And next to the temple there is Bakhor Street, filled with pilgrims and street vendors, selling traditional Tibetan items such as prayer wheels and jewelry. It has strong local style and national characteristics. Bakhor Street is the most famous commodity street in Lhasa. It is also an ancient and sacred place in Lhasa; you can visit Bakhor street for a long time and buy some souvenirs if you like.

In the morning, tourists are going to visit Drepung monastery which was one of the "three greet" Gelug monasteries of Tibet and was founded in 1416. Drepung monastery is one of the six temples of Gelug Sect of Tibetan Buddhism and the largest monastery in the world. Before liberation, there were as many as 10000 monks here.Drepung monastery has a tight architectural structure, connected temples and stacked buildings. Each building unit is basically divided into three horizontal levels: the courtyard, the Sutra hall and the Buddha Hall; forming a pattern of rising layer by layer from the gate to the Buddha Hall, emphasizing and highlighting the noble status of the Buddha Hall. Among them, the large-scale, magnificent and solemn Cuoqin hall is arranged in disorder; and it is the main building of Drepung monastery. Ganden palace is used as Dalai Lama's palace in the Drepung before moving to the Potala palace.

Afternoon, Sera Monastery---It was one of the "three great" Gelug monasteries of Tibet and was founded in 1419. The highlight is the Monks debate at around 3 - 5 in the afternoon. And a lot of people come here for watching the debate, so if you can get earlier then you will get a good seat. Besides, the older murals are preserved in many large halls of Sera Monastery. It is best for tourists to bring a flashlight or headlights for easy appreciation. Tens of thousands of Vajra Buddha statues are also preserved in the temple, some of which are made locally, and a few are brought from the mainland or India. You can see the whole Sera Monastery in the northeast of the Buddha platform ; every year, the Sutra ceremony is held here on the Sho Dun Festival.

Transfer clients to the airport or train station. Wish you have a pleasant journey home!