Let the world’s unique train—China Orient Express (also known as Shangri-la Express) take you back to the Silk Road dating back to over 1000 years ago, to explore the best attractions of ancient Silk Road in 2020! With the fabulous design and intimate services on China Orient Express , as well as the various haunting sights along Silk Road, we promise that you'll be dazzled! 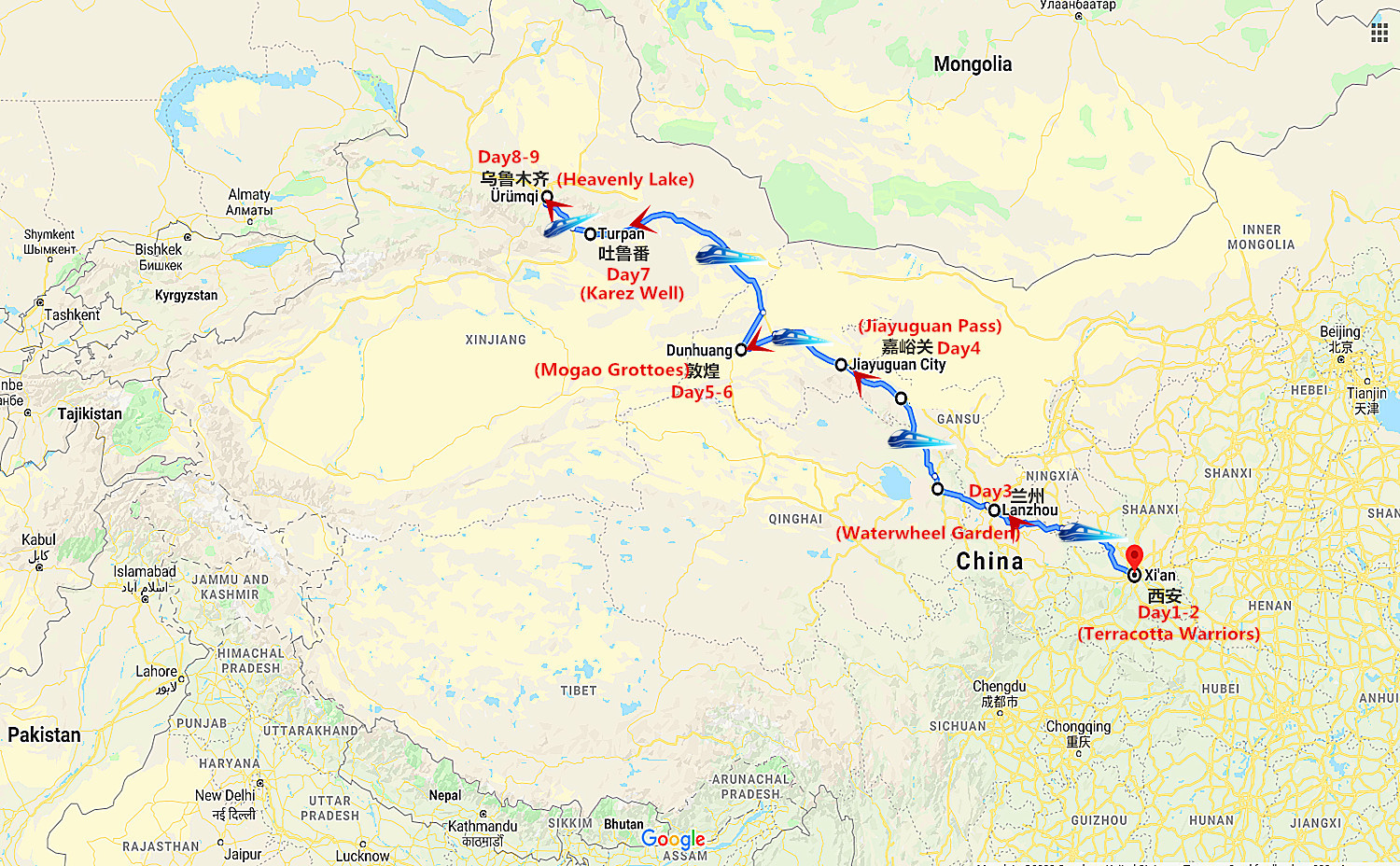 Arrival in Xi' an, our guide will greet you at the airport and transfer to hotel. Xi’an is a city with over 3000 years history and it is also the starting point of the ancient Silk Road.

Day 2Meet the Eight Wonders of the World: Terracotta Warriors

Have breakfast in the hotel, then we drive to the famous Terra Cotta Warriors and Horses Museum, one of the eight wonders of the world. Be excited to observe China's first emperor - Emperor Qin's great army of 8000 life-sized terracotta soldiers and horses in three burial pits. Afterwards,we continue to Huaqing Hot Spring in Mt Lishan. In ancient time, emperors used to come here to bathe and enjoy the scenic beauty. It has become a favorite spa since the Tang Dynasty.

After breakfast, we will transfer to train station for high-speed train to Lanzhou. It takes only three hours to complete the 700-kilometer distance on China’s fastest and comfortable bullet train. Upon arrival, meet your Lanzhou guide and visit the Waterwheel Garden. Originated from the Ming Dynasty (1368-1644), the waterwheel is the oldest irrigation tool in Yellow River area of Lanzhou. The Waterwheel Garden is a theme garden exhibiting the waterwheel culture. Here, we could appreciate the waterwheel driven by the flowing water all year round to collect water from the river or cofferdam. At 22:00pm, we embark the 'China Orient Express' Charter Luxury Train to Jiayuguan. Have a nice night on the train with wonderful evening and morning views of local countryside.

Day 4Explore the Western End of the Great Wall

After breakfast, have a visit to the Jiayuguan (Jiayu Pass), the western end of the Great Wall built in Ming Dynasty. It is known as 'the First and Greatest Pass under Heaven', and best preserved and most magnificent military fort in China. Then we drive 7 miles away for the Overhanging Great Wall. It got the named for riding on a mountain ridge that is 45 degrees from vertical and resembling a huge dragon.

After a pleasant breakfast, take this deluxe train to Dunhuang at 10:00am. We specially arrange Dunhuang experts and professors who'll introduce this exotic city in detail to you. After arriving in Dunhuang, we visit beautiful Crescent Lake & Singing Sand Mountains. The Crescent Lake is an oasis Gobi desert, surrounded by numerous sand dunes, reaching a relative height of 250 meters (820 feet). The Mingsha Shan is so named for the sound of the wind whipping off the dunes. After dinner, we move to Dunhuang Night market - bustling Shazhou Night Market. Never miss its tasty snacks, local specialties, and crafts etc.

After breakfast, let's visit the world famous Mogao Grottoes, which was designated as a world cultural heritage by UNESCO for its 1600 years accumulated cultural, architectural, and art treasures. There remains 492 cave temple and 45000 square meters of frescos. According to Tang Dynasty records, a monk had witnessed onsite a vision of thousand Buddhas under showers of golden rays. Thus inspired, he started the caves construction work that spanned ten dynasties. Mogao Caves are commonly known as the Caves of a Thousand Buddhas. At 17:00hr, we embark the 'China Orient Express' Charter Luxury Train to Turpan.

It’s a day for Turpan sightseeing! Visit Karez irrigation system to witness the wisdom of Uygur people. The irrigation system is especially designed for desert. If connecting all these underground channels, the total length will reach more than 5000 km, so it is regarded as one of the three engineering miracles of ancient China, along with the Great Wall and the Jinghang Grand Canal. Thereafter, we move to Flaming Mountain, well known by Chinese people because of the legendary story 'Journey to the West'. It is regarded as the hottest place in China. Then We drive to Jiaohe Ancient City, an island-shaped plateau situated at Yar Town. It is the largest, oldest and well preserved earth-structured city in the world, with a history of 2000-2300 years.

After breakfast, visit Heavenly Lake on Tianshan (boat tour). The Mountain Lake stands 1980 meters above sea level and features picturesque scenery of snowcapped peaks. It a great pleasure to boat travel Heavenly Lake, with a layer of magical color covering the lake, and hearing many beautiful myths and legends. Then head for Urumqi, and visit Xinjiang International Bazaar.

Today is the day of farewell to your memorable Silk Road trip and the unique China Orient Express. After a pleasant breakfast, free at your own leisure till the assemble time for the transferring to airport for the flight back to your hometown or next destination. Bon voyage!

Prices may change, so secure your trip today!