Shah Faisal Mosque Faisal Mosque in Islamabad, Pakistan is the biggest mosque of South Asia and the sixth largest mosque in the world with covered area of 5000 square meter (54,000 square feet), and room for containing as many as 300,000 worshipers in its main prayer hall, porticoes, courtyard and adjoining grounds.

The eye-popping Shah Faisal Mosque, nestled at the foot of the Margalla Hills, is one of Asia's largest and reflects an eclectic blend of ultramodern and traditional architectural design styles. Topped by sloping roofs (a stark contrast to the traditional domes found on most mosques), the main prayer hall and courtyard is said to hold around 100,000 people. Most of its cost (pegged at about US$120 million today) was a gift from King Faisal of Saudi Arabia.

Designed by a Turkish architect, Vedat Dalokay, and built between 1976 and 1986, the mosque's geometric design (m 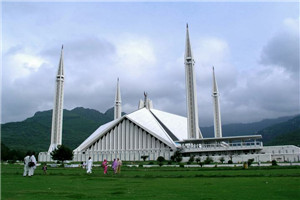 odelled on a desert tent) and clean lines make the impressive scale hard to discern until you are up close. The four 88m minarets (an old urban myth is that the ever-paranoid CIA demanded to inspect them, fearing they were missiles in disguise!) tower over the prayer hall. Inside, the ceiling soars to 40m and the air hums with muffled recitations. The mausoleum of the late President, Zia ul-Haq, is adjacent to the mosque.

Visitors are welcome, but non-Muslims are requested to avoid prayer times and Fridays. Leave your shoes at a counter before entering the courtyard and remember to dress conservatively (women should bring a head scarf). To get here, jump off an intercity bus at 8th Ave or catch a taxi (around Rs 80 from the Blue Area).

King Faisal bin Abdul Aziz of Saudi Arabia both suggested (in 1966) and largely funded the Faisal Mosque, which is named in his honor.

Ever since its conception, the mosque has been regarded as the national mosque of Pakistan, and as such it symbolizes the hopes and aspirations of the new nation.

The architect was Vedat Dalokay of Turkey, whose design was chosen in 1969 after an international competition. Constructed was completed in 1986.

What to See at Faisal Mosque

The Faisal Mosque is located on an elevated area of land against a picturesque backdrop of the Margalla Hills. This enviable location represents the mosque's great importance and allows it to be seen from miles around day and night.

The mosque's architecture is strikingly modern and unique, lacking both the traditional domes and arches of most other mosques around the world.

The shape of the Faisal Mosque is an eight-sided concrete shell inspired by a desert Beduoin's tent and the cubic Ka'ba in Mecca, flanked by four unusual minarets inspired by Turkish architecture. The architect later explained his thinking to design school students:

Entrance is from the east, where the prayer hall is fronted by a courtyard with porticoes. The International Islamic University was housed under the main courtyard, but recently relocated to a new campus. The mosque still houses a library, lecture hall, museum and cafe.

The interior of the main tent-shaped hall is covered in white marble and decorated with mosaics, calligraphy by the Pakistani artist Sadeqain, and a spectacular Turkish-style chandelier.

The mausoleum of General Muhammad Zia-ul-Haq, whose 1988 funeral at the site was the largest in the history of Pakistan, is located adjacent to the mosque