The tomb of Jahangir is located in Shahdara, a suburb of Lahore to the northwest of the city. The area had been a favorite spot of Jahangir and his wife Nur Jahan when they resided in Lahore, and the area was commonly used as a point of departure for travels to and from Kashmir and Lahore. When Jahangir died in 1627 he may have initially been buried in Shahdara in one of its many gardens. His son, Shah Jahan, ordered that a mausoleum befitting an Emperor be built as a permanent memorial.

Standing in a garden on the northern outskirts of Lahore, the elaborately decorated sandstone Jehangir's Tomb is that of Emperor Jehangir. Built in 1637 by Jehangir's son, Shah Jahan, it's believed to have been designed by Jehangir's widow, Nur Jahan. The tomb is made of marble with trellis decorations of pietra dura bearing the 99 attributes of Allah in Arabic calligraphy. These are inside a vaulted chamber, decorated with marble tracery and cornered with four minarets. 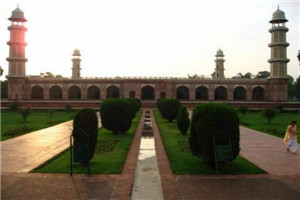 Outside is a sunken passageway with one tunnel supposedly leading to Shalimar Gardens and another to Hiran Minar - both tunnels are now bricked up.

The entrance to the tomb courtyard lies on the right-hand side of Akbar's Caravanserai, a 180-room resting place for pilgrims, travellers and their animals, built by Shah Jahan at the same time as Jehangir's Tomb. The western gateway leads to the Tomb of Asif Khan. The brother-in-law of Jehangir and father to Mumtaz Mahal (the lady for whom India's Taj Mahal was created), Khan died in 1641.

An autorickshaw/taxi from The Mall to Jehangir's Tomb (or Nur Jahan's Tomb, described below) costs about Rs350/Rs700.

The flat roof of Jehangir's Tomb, some 200 feet square has a low platform (a Chabutra) at the center, which has raised a question of acute archaeological interest - was there at any date of an upper dome over the roof of the tomb chamber? Tradition, though tradition is in India no very certain guide, is strong on the existence of a dome.

The Traveler Moorcroft, writing in 1820, says that the dome was believed to have been taken off by Aurangzeb" that his grandfather's tomb might be exposed to the weather, as a mark of his reprobation of the loose morals of Jehangir."

Alexandar Burnes in 1832 and Von Orlich in 1843 attributed it's removal to Bahadur Shah; in their case the motive assumed was merely a desire that "the rain and dew might fall on the tomb of the Emperor's ancestor."

Later writers give other versions both of the date of the removal and its reason; the most interesting is the story that Ranjit Singh transferred the dome bodily to his baradari in the Hazori Bagh. As to this, it is perhaps sufficient to say that though there good evidence of pilfering by Ranjit Singh from the tomb of Jehangir (as the Lt. Barr's account of 1839) the story of removal of the dome was not known till about 1880. 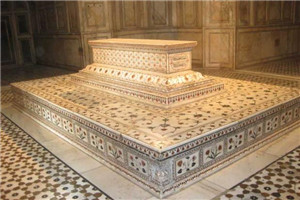 There is a little of documented evidence to support these traditions. We know from Niccolao Manucci (always inclined to malice) that Aurangzeb did offer some indignity to the tomb; but the merely states that the Emperor removed some of the precious stones. It is indeed more than probable that the whole tradition is connected, somewhat obscurely, with the account given by an historian whose date gives his evidence real value. Mahomad Salih was a literary man, much interested in architecture, who held a post in the Lahore Court and died in 1674; he must frequently have visited the tomb. He says that the Emperor "had directed in his will that his resting place should be devoid of structural decorations, and that they should commit his body to the mercy of God in an open place, so that it migh ever commerce unimpeded with the clouds of God's infinite compassion; so verily his successor, acting on his will, constructed round his sleeping place a lofty "Takhtgah measuring 100 zira by 100 of hewn red stone carved. On the top that he placed a chabutra of marble, twenty by twenty, decorated with Parchinkari which is finer than Khatambandi." That passage would solve the problem, if there were certainly as to its exact measuring. The measurement of the Takhtgah corresponds t that of the plinth holding the main building; the measurement of the Chabutra corresponds closely enough with that of the low platform on the roof; but the interpretation of the rest is doubtful.

Sir J. P. Thompson, who has examined the whole question with minute and scholarly care, believes that what Mahmod Salih indicated was a closed roof, surmounted by a Chabutra, with "false tomb" on it, exposed to the air, and surrounded by a screen. The structural features of the chamber and the Chabutra offer no clear opposition to this view; there is nothing contrary to sentiment of practice in building a "false tomb" above the real burial place; and so far, this view seems to hold the field