The restoration of Ganish Village is particularly good and won a Unesco Asia Pacific Heritage Award. While Baltit Fort shows how the cream of society lived, Ganish shows another side of traditional Hunza life. Behind a shaded, tranquil tank are several richly carved wooden mosques, 100 to 200 years old, the restoration of which clinched the award. Legend has it that Ganish warriors practised their river-crossing techniques in the tank before crossing the Hunza River to attack Nagyr villages.

The timber-and-stone watchtower from the days of war with Nagyr is a tight squeeze but worth the climb. Particularly interesting is the use of the cool glacier meltwater to store food - it's still done today. Butter is wrapped in birch bark and can be stored under water for years! You may even be offered a sweet made from the butter. For all its quaintness and award-winning restoration, Ganish is not a museum (there is a local museum under construction) but a living village. This is exemplified perhaps by the huge concrete Imamia complex being constructed beside the walled village. The Imambara is expected to be clad in wooden carvings which may help it blend in. If no-one is staffing the admission booth, walk towards the village and someone will find you. 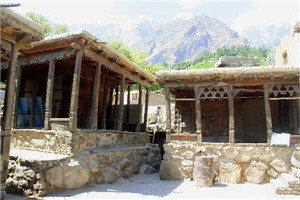 Ganish is one of the oldest settlements in the region, lying on the Ancient Silk Road, which passed by the Northern Areas around 180 BC – 10 CE. It is a prime example of a living, breathing heritage site. The community of Ganish has received two UNESCO awards, in 2002 and 2009 for Cultural Heritage Conservation in Asia Pacific.

The entrance of the community is marked by a recently-built Imam Bargah, that is also home to a library, dispensary, and center for cleaning and shrouding the dead. The entry for visitors has been formalized in recent years, with a Rs.300 fee. There is a friendly old tour guide who takes you around the village while narrating its story.

Ganish was originally built as a fortified colony to guard against outsiders. At the time it was founded, the back side of the community had a cliff overlooking a river, which made it easier to survey. Since then, due to land sliding and other natural disasters, the river no longer flows there, and large parts of site were destroyed. Originally, there were around fourteen watch towers, but now only a few remain. At the entrance of the village walls, there was a pond where children could be seen swimming and playing, and its memory serves as a strong reminder of the village’s sense of community. 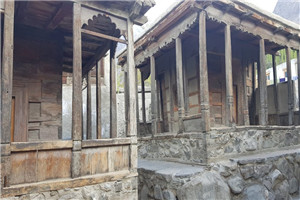 The word “Ganish” is not to be confused with the Hindu god “Ganesh”, which is often a common misconception. “Ganish” itself has several meanings, but most likely originated from the local language of Burushaski, in which it means “gold” or “gold reserve”. It also means “plain” or “plateau”, which makes sense, given that this region is flatter than its surrounding areas.

The structure and layout of the community is quite interesting. Firstly, it has compact homes and streets, with very small entrance doors. They used to place their livestock near their entrances, in order to keep the indoor area more insulated during the harsh winters. Another reason was that, in case of an invasion, the animals would alert the villagers.

There are also multiple mosques built within the complex, which are only about 200 years old (which make them recent, compared to the village's 1000-year old history). These came from later periods, when the region was ruled by local Muslim rulers. There are two fascinating things about these mosques which makes them distinct. Firstly, these were built by different rulers because they wanted to be remembered. But the size of these mosques are very small, meaning they only fit a few people at a time. Secondly, the wooden relief work on the arches outside some of the structures is exceptionally interesting, and peculiar to this village.