For those who don’t know, Emperor Aurangzeb lived from 1618-1707 and reigned over much of southern Asi 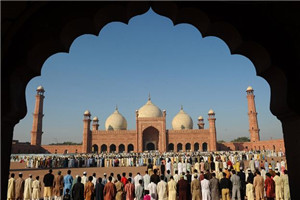 a for almost 50 years. His great skill in battle led him to control over three million square kilometers of land. Emperor Aurangzeb greatly expanded the Mughals’ control and is seen as one of the most effective generals in history. Sadly, after Emperor Auangzeb’s death the Mughal Empire began to slowly decline in power.

Interestingly, the Badshahi Mosque wasn't used as a house of worship for most of its history. Once the Sikhs took power of the region in 1799, the mosque was used to house and train soldiers. The Sikhs’ army equipment and horses were all stored in and around this mosque. They also built the marble Hazuri Bagh Baradari in 1818 to watch over the mosque.Completed in 1674 under Aurangzeb as the Mughals' final architectural fling, the sublime Badshahi Mosque, opposite the main gateway to the Lahore Fort, is one of the world's largest mosques. Replete with huge gateways, four tapering minarets of red sandstone, three vast marble domes and an open courtyard said to hold up to 100,000 people, it was damaged by the British and later restored.

The rooms (admission Rs5) above the entrance gate are said to house hairs of the Prophet Mohammed and other relics. The mosque looks lovely when it's illuminated in the evening.

In 1991 the mosque grabbed international headlines when hardline mullahs (Muslim religious leaders) protested at the visit of the late Princess of Wales; her skirt was considered too short and the director of the mosque was criticised for presenting (the then) HRH, a non-Muslim, with a copy of the Quran and allowing her into the sacred precincts while immodestly dressed. The case went to court and ended with the litigant mullahs being ordered to stop wasting the judge's time.

In the courtyard stands the Tomb of Allama Mohammed Iqbal, a modest memorial in red sandstone to the philosopher-poet who in the 1930s first postulated the idea of an independent Pakistan.

Badshahi Mosque was constructed in Mughal era during the reign of sixth Mughal Emperor Aurangzeb Alamgir. He ordered the construction of Badshahi Mosque in 1671 A.D. For this purpose, he appointed his foster brother Fiadi Khan Koka governor of Lahore, specifically to undertake supervision of the construction work of the mosque. The mosque was completed after two years in 1673 A.D. Fiadi Khan Koka remained the governor of Lahore until 1675 A.D.

In July 1799, the Sikh militia Maharaja Ranjit Singh conquered Lahore. During the Sikh rule the mosque was badly mistreated and damaged several times. The Sikh Maharaja used the vast courtyard of the mosque as a stable for horses of his army. He also used 80 hujras (study rooms) built around the courtyard as quarters for his soldiers and as storehouses for weapons.

In 1841, a Sikh civil war was provoked between Sher Singh (son of Ranjeet Singh) and Maharani Chand Kaur. During the war Sher Singh used the minarets of Badshahi Mosque to place light guns called Zamburahs to bombard the supporters of Maharni who took refuge in Shahi Qila.

In the middle of 18th century after British took over the Lahore, the British East India Company continued to use the mosque for military purposes. They demolished the 80 hujras (study rooms) around the courtyard of the mosque to prevent them for being used against British and rebuilt to create dalans (side aisles) which are still there.

In 1952 the British leadership in India sensed the increasing resentment in Muslims against the use of Badshahi Mosque for military purposes, so they created Badshahi Mosque Authority for restoration of the mosque to its original form and returning to Muslims.

Later Fakir Family of Lahore donated relics of Prophet Muhammad, his daughter Fatima and his cousin Ali to Badshahi Mosque. The Government of Pakistan used these relics to set up a museum inside main gateway entrance of Badshahi Mosque. 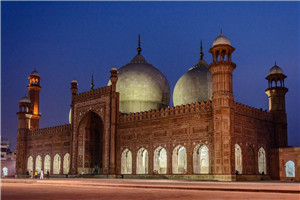 In 1993, the Government of Pakistan proposed the consideration of the Badshahi Mosque as a UNESCO World Heritage Site, where it has been added to Pakistan’s Tentative List for possible nomination to the World Heritage List.

In 2000, repair work was done to the marble inlay of Badshahi Mosque.

In 2008, the red sandstone tiles of Badshahi Mosque’s large courtyard were replaced. The sandstone used for this replacement was imported form a place near Jaipur, Rajasthan in India which was original source of the sandstone used when the mosque was constructed back in 1673.

Badshahi Mosque and its vast courtyard are built upon a platform which is accessed from the east using 22 three-sided steps and graceful gateway of traditional Mughal style.

The Main Prayer Hall of Badshahi Mosque has a total area of 22, 825 sq. feet (2120 sq. meters). Its interior is richly decorated with inlaid marble, fresco work, and stucco tracery. The exterior of Main Prayer Hall is embellished with stone carvings and marble inlay on red sandstone.

The courtyard has a total area of 278, 784 sq. feet (25, 899.9 sq. meters). The present red sandstone flooring on courtyard was laid during the major renovation work done by Badshahi Mosque Authority (1939-60). Originally it was decorated with small kiln-burnt bricks laid in Mussalah Pattern.