12 Days Panoramic Turkmenistan Tour in and out from Ashgabat

● Drive by 4WD along the Koytendag mountain gorge and enjoy a view of Koytendag from a distance, the home of the highest mountains in Turkmenistan

● An incredible view of Darwaza burning Gas Crater dubbed by locals as "The Door to Hell". 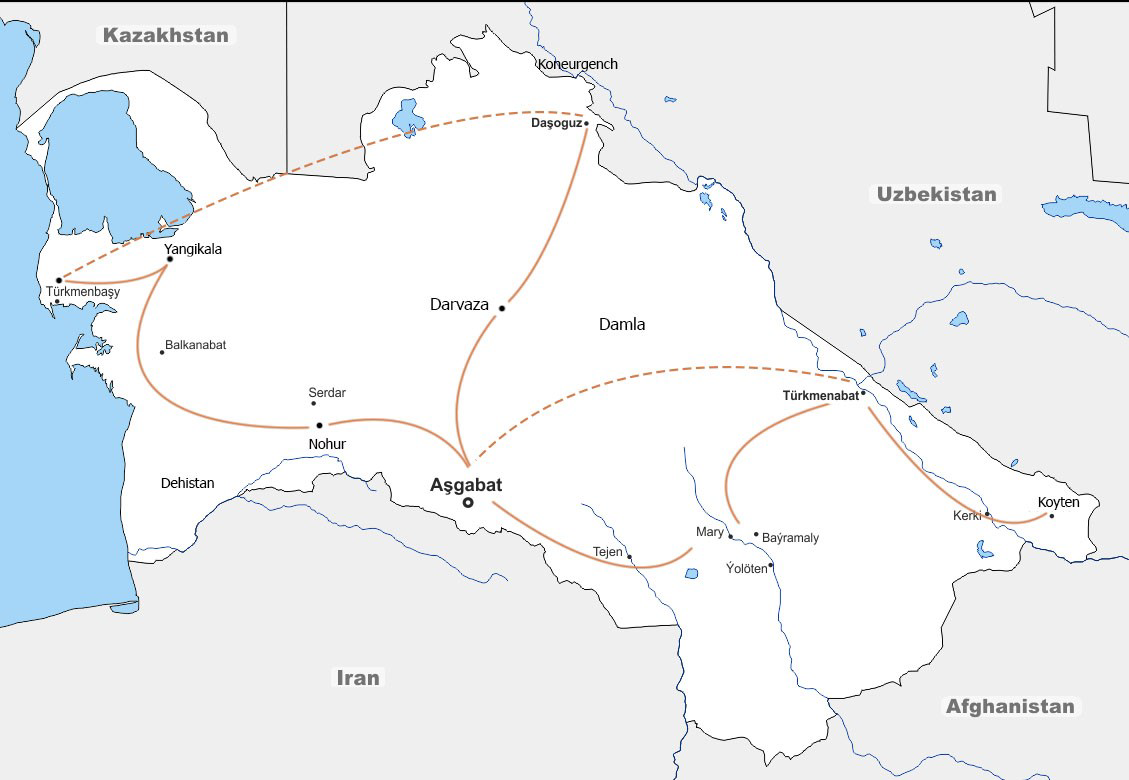 Arrival in Ashgabat by morning flight. Ashgabat is the capital and largest city of Turkmenistan even though it is relatively new city. In 2013 the Guinness Book of Records named Ashgabat "white marbled city" - here you can see the biggest number of structures in the world made out of the white marble such as monument of Akhalteke horses, park of "Ylham" (Inspiration), "Altyn Asyr" trade market and "Gulistan" market (so called Russian bazaar). After lunch half day tour of Ashgabat includs Monument of Independence, National Museum of History and Ethnography, and Arch of Neutrality, a 75m high monument with a revolving golden statue of the first President Turkmenbashy. Hit the viewing platform of the Arch of Neutrality to see the beautiful panorama of Ashgabat. Panoramic tour to "Alem" Ferris wheel, "Bagt Koshgi" (wedding palace). Continue tour to the historical and archaeological site "Ancient Nissa – the Residence of Parthian Kingdom" UNESCO site from 2007. The Parthian Empire was one of the most powerful and influential civilizations of the ancient world, and a brilliant rival of Rome which prevented the expansion of the Roman Empire to the east.

First visit "Kow-ata" underground lake on the way to Nokhur Mountain Village. A warm hydrogen sulphide lake lies in a cave at the Kopet Dag foothills. 276 steps lead into the lake. On your way down you will admire marvelous grapes and lines of stalactites and see bat's bevies. This cave impresses with its greatness. It has the length of 250 m, width 50 m, depth of 65 m. The lake is available all year round because of constant temperature of water. Arrival in Nokhur village. Short sightseeing of Nokhur village and visiting of "Gyz Bibi" Pilgrimage site & its unique cemetery where each tomb has the horns of moun-tain goats, the Great Tree - oldest tree in the village thought to be 800 years old. Even-ing short introduction with local silk textile weavers and having dinner at local family. Overnight in tents or at local family's house.

Day 3Nokhur and drive to Yangikala via Balkanabat

Yangikala, an impressive limestone formations rises up from the desert sands with views of the Karabogaz Gulf in the distance. These limestone cliffs are the remains of massive coral reefs from the pre-historical Parathetys Sea. En route to Yangikala stop in Balkanabat to have lunch and visit the local bazaar to stock up with food & drinks for dinner. Continue to explore the canyon of Yangikala, the best scenery in Turkmenistan, and take a picnic among the cliffs. When the sun sets we drive to the pilgrimage site of Gozli Ata - one of the holiest pilgrim sites in Turkmenistan. The mausoleum of Gozliata, located on a low plat-form against the backdrop of stunning pink and red limestone rock for-mations.Overnight at a local pilgrim house (multi-share accommodation) or camping.

Turkmenbashy - the biggest port town of Turkmenistan. The town is enclosed with low mountains and faces the Caspian Sea. You will stay over in one of the best hotels in Avaza - the most popular sea resort center (10 km from Turk-menbashi) . Rest on the shores of the Caspian Sea. Short sightseeing in Avaza with its nice beaches which will be turned soon into the free economic touristic zone with decades of luxurious hotels, resorts and health clubs. Overnight at "Seyrana" 5* hotel or similar.

Transfer to the airport and flight to Dashoguz. Arrival & check in Uzboy hotel. Short sightseeing in Dashoguz city. Overnight at the hotel.

Koneurgench - the capital of Khorezmshahs (3-16th cc.) inscribed into the World Heritage Book of UNESCO.Koneurgench (known as Gurganch in the past) is the largest historical and archaeological park in the north of Turkmeni-stan. It is a large reserve with numerous ruins and monuments on the territory of modern Kunyaurgench. Such great Muslim scholars as al-Biruni, al-Khorezmi and Avicen-na once worked here. Sightseeing of the old city: Portal of Caravansaray (11-14th cc.), Il Arslan Mausoleum (12th c.), Mausoleum of Khorezm shahSultan Tekesh (13th c.), Academy of Horezm (3-13th cc.), Mausoleum of TurabekHanum, Minaret of KutlugTimur (14th c.) - one of the tallest minarets in Central Asia, Najmeddin Kubra (13th c.) and Soltan Ali (15th c.) Mausoleums. After sightseeing of KoneUrgench drive to Darvaza. Arrive at Darvaza and explore the flaming Gas Crater at sunset. Having dinner (barbecue). Overnight in tents. (D).

Drive to Ashgabat. En route explore the gas craters, first full of water, and second the sulfur - muddy. Make the next stopover to visit Yerbent Nomadic village where you can enjoy seeing the local life in the desert - Turkmen yurts, dromedaries, tamdyr (mud oven) and many others. Arrive & check in the hotel “Grand Turkmen”. Overnight.

Day 8Mary Sightseeing and exploration of the ancient city Merv

Drive to Mary to visit Anau pilgrimage place (remains of Seyitjemalatdin mosque XV c). Lunch at Hanhovuz chayhana to taste silver or grass carp fish. Arrive in Mary & check in Margush hotel. Visit the museum of history and ethnography of Khorassan region in Turkmenistan. Drive to Merv historical site. The ancient city of Merv (Persian Marv) contains a succession of ancient cities developed over a period of 2500 years at the heart of the oasis formed by Murgab river delta, and close to the course of where the main river channel flowed in ancient times. Together, the cities of Merv once encompassed over 1000 hectares. In 1999, the United Nations declared Merv a World Heritage Site. Overnight at the hotel.

Explore the Koytendag Nature Reserve in Koyten village, where you will see dinosaur footprints, a vast network of caves and Turkmenistan's highest peak. The region has some fine historical monuments and holy places as well. En route stop to visit "Astana-Baba" Mausoleum in Atamyrat. Crossing Amudarya River. Arrival in Koyten. Accommodation in the hostel. Overnight.

Day 11A whole day to explore the Koytendag

Morning drive by 4WD along the Koytendag mountain gorge. Koytendag is the highest mountains in Turkmenistan, the deepest lake, the longest caves and the most majestic natural waterfalls in the country. Koytendag Nature Reserve is a huge geological research center, the pride of which is the rocky plateau with hundreds of dinosaur footprints. Explore "Forty Girl's Gorge", "Plateau of Dinosaurs". Lunch outdoors. Visit of Umbar-Dere Waterfall. Return to the hostel. Excursion to the Kaynar Baba Lake. Overnight at the hostel.

Day 12Drive back to Turkmenabat. Fly to Ashgabat

Morning drive by 4WD back to Turkmenabat. Evening flight to Ashgabat. Arrival and transfer to Ashgabat International airport.