● Travel to Turkmenistan, one of the Central Asian countries. Explore the marvelous natural wonders and folk customs of locals

● Walking in the capital city Ashgabat, where you can see the biggest number of structures in the world made out of the white marble.

● Visit the famous Ahalteke horses at the Horse Farm in Turkmenistan

● An incredible view of Darwaza burning Gas Crater dubbed by locals as "The Door to Hell".

● BBQ dinner and Camp Accommodation at the burning Gas Crater 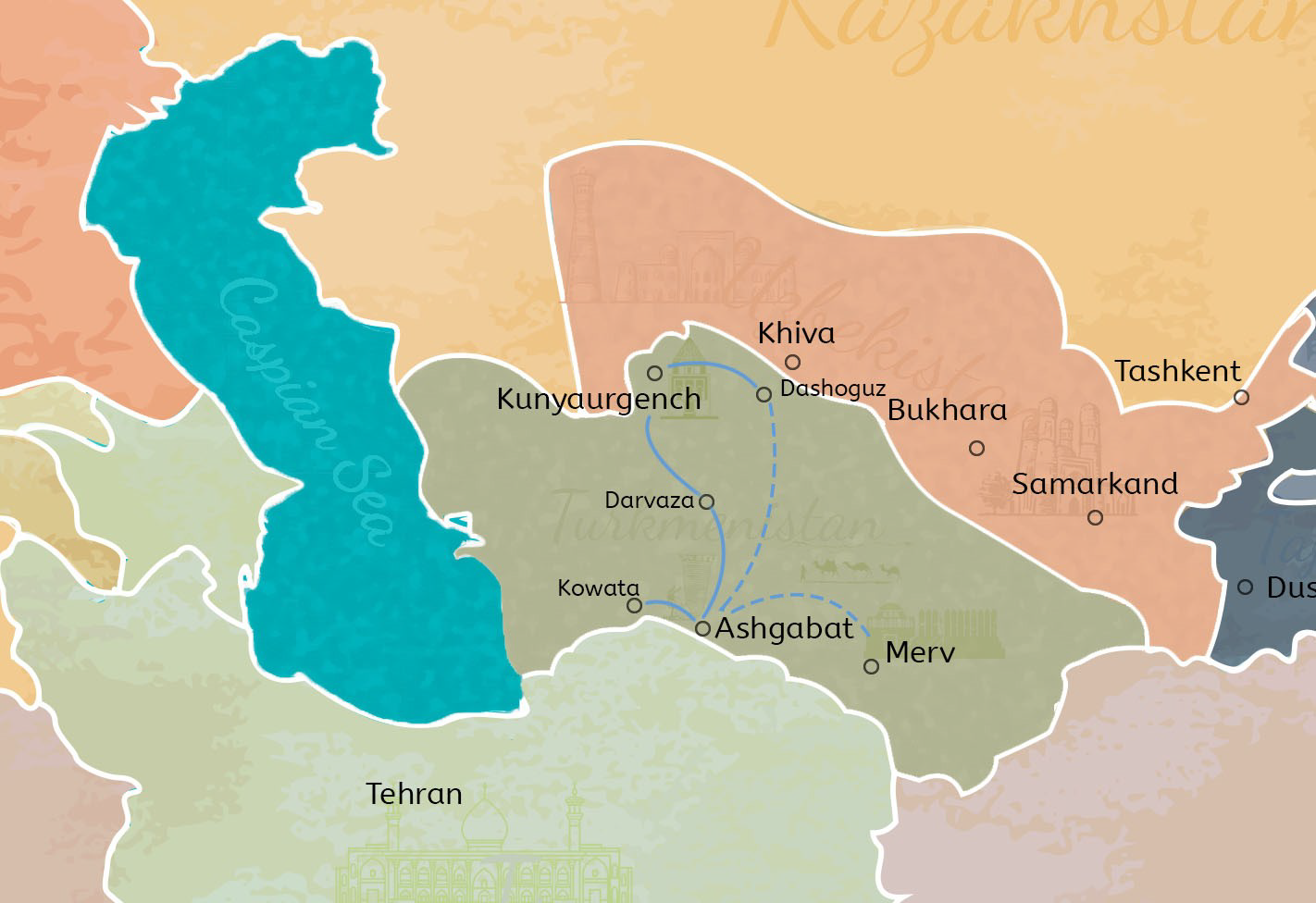 Arrival in Ashgabat International airport. You will be met by our representatives and transfer to hotel. Free time.

Nissa Fortress -the Sanctuary of Parthian Kings. UNESCO declared the fortress a World Heritage Site in 2007. Nissa described as one of the capitals of the Parthians, founded by Arsaces I (reigned c. 250 BC – 211BC), and reputedly the royal necropolis of the Parthian Kings, it has neither been established that the fortress at Nissa was a royal residence or a mausoleum though.

Afternoon you will have Ashgabat city tour. In 2013 the Guinness Book of Records named Ashgabat “white marbled city” – here you can see the biggest number of structures in the world made out of the white marble. You will see Presidential Palace, Ruhyyet Palace, Wedding Palace, modern “Yildyz” Hotel, Ferries Wheel, Constitution Monument, Arch of Neutrality, Monument and park of Independence, Ertogrul Gazy Mosque, Ashgabat Sports and Housing facilities, the Earthquake and victims of WWII Mon-uments.

Day 3Ancient Ruins of Mary and Merv, then fly back to Ashgabat.

Morning drive to Mary. You also see ruins of Seyitjemalledin mosque in Anau. The mosque was built in 1456, when AbuibnKasim Baber Bahadurkhan ruled in Khorasan (1446-1457). The mosque was financed by Bahadurkhan's vizier, Muhammed Hudaidot, who also selected a site of construction near the grave of his father, sheikh Jemaleddin, a native of Anau. The square central hall (with the sides of 10.5 meters) was crowned with a dome. In later periods, the Seyit-Jemaleddin mosque was partially reconstructed. By the nineteenth century, the subsidence of land had already damaged the building heavily, and during the 1948, it was completely destroyed in the Ashgabat earthquake . Now, only lower parts of the portal and some fragments of the walls are extant.

On the way visit Abiwerd that was once an important trading town of North Khorasan. It was a key link on the Great Silk Road between Nisa and Merv, and also enjoyed ties in Nishapur, across Kopetdag Mountains to the south.

After sightseeing transfer to Mary airport for back flight to Ashgabat. Arrival in Ashgabat. Accommodation & overnight at a hotel.

Afternoon drive to Darwaza burning Gas Crater (3.5 h) dubbed by locals as "The Door to Hell". The Darwaza area is rich in natural gas. While drilling in 1971, former Soviet geologists tapped into a cavern filled with natural gas. The ground beneath the drilling rig collapsed, leaving a large hole with a diameter of 70 meters. To avoid poisonous gas discharge, they decided to burn it off. The geologists had hoped the fire would put out in a few days, but the gas is still burning today. En-route we cross Karakum desert, will make a stop in small desert village Erbent. In the eveningwe will watch the spectacular and fascinating view of the gas crater. BBQ dinner at Gas Crater. Overnight in camp.

Day 5Sightseeing in Kunya Urgench and drive to Dashoguz

After sightseeing, drive to Dashoguz. Overnight at hotel.

Arrival in Ashgabat by air and to visit Kowata under-ground lake. It is located 107 km from Ashgabat. The Turkmen name Kowata means "father of caves". This underground area seems like a magnificent auditorium for the overall length of the cave is 230 m with its height 20m and its width 57m. The bottom of the cave is covered with lumps of dissolved limestone (stalagmites), and its warm and gushing water is clear and emerald colored. The water has a constant temperature of 33-37°C. (You should swim in the lake).

Gokdepe fortress was attacked in December 1880 by the Russian Empire Army. The siege of Gokdepe lasted 23 days, after which the city was taken by storm. Visit Geokdepe Mosque (Saparmyrat Hajy) that was built in 1995 to commemorate the defeat and is noted for its mint-turquoise blue colored roof and white marble structure.

Then visit Gokdepe museum about the battle between Russians and local tribe "Akhalteke" in 1881.