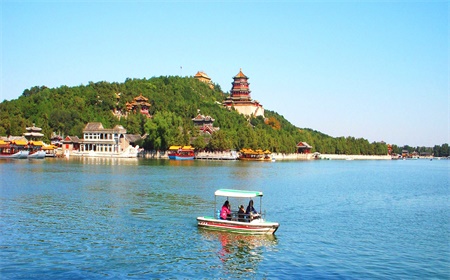 As one of the magnificent scenery in Beijing, with its handsome buildings, pretty scenery and tumultuous history, the Summer Palace is a wonderful place to explore. As long ago as the Yuan dynasty, officials set up their private gardens in the scenic area, but the Summer Palace didn't take on its present appearance until the reign of Emperor Qianlong of the Qing dynasty. He deepened the park's manmade lake and added buildings to serve as a "country home" for his mother, though it would be the Empress Dowager Cixi who would have the biggest impact on the palace's appearance.

The History of Summer:

During the Second Opium War in 1860, the Summer Palace was looted and partially destroyed by French and British forces. In 1886. Cixi diverted funds earmarked to build a modem Chinese navy and spent the money on endowing the Summer Palace with a marble boat-shaped pavilion and other extravagances throughout the palace. She also gave the palace its current name, Yiheyuan, which means the "Garden for Cultivating Harmony." an ill-fitting name as the Summer Palace would inspire little harmony. China soon paid for her imperial lavishness when a modern Japanese fleet destroyed its navy in 1895.

In 1900. Western armies again inharmoniously sacked the Summer Palace, this time in retaliation for the Boxer Rebellion. Undeterred, Cixi again rebuilt this pleasure dome which had become her fulltime residence. She died in 1908. but the imprint of this cunning and powerful woman, who ruled China from behind the scenes for years, remains very strong on the buildings today.

What to visit in Summer Palace? 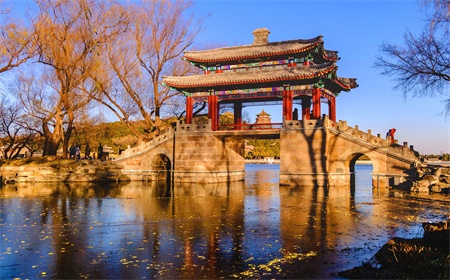 Most of the major sights are concentrated in the northern part of the compound. Near the East Palace Gate, the entry point for most tourists is the Hall of Benevolent Longevity where Cixi held court on her hardwood throne. A short walk away, on the shore of Kunming Lake is the Hall of Jade Ripples where Emperor Guangxu, Cixi's nephew, was held under house arrest on Cixi's orders for daring to undermine her authority. The Hall for Cultivating Happiness is the name of Cixi's delightful private theatre that was built for her 60th birthday. Nearby is a display that includes a Mercedes Benz, the first car imported into China. The Empress Dowager lived in the Hall of Happiness and Longevity, which is decorated with many period pieces.

These private apartments open up to the most arresting construction in the Summer Palace, the Long Corridor. More than 700 m long and ending at the Marble Boat, this shaded walkway is decorated with some 10.000 painted scenes, each walkway shows the different look. Paths lead off from the Long Corridor to the temple complex atop Longevity Hill which includes the Buddhist Incense Tower and the tiled Temple of the Sea of Wisdom. 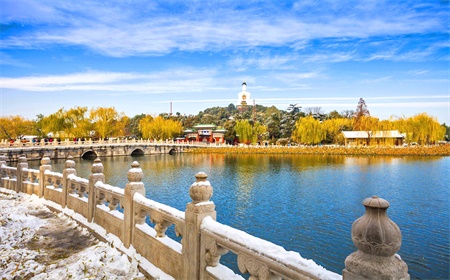 The vast Summer Palace compound centres on Kunming Lake. In summer, tourists can explore the lake on the boat, and skate across its frozen expanse in the winter. The highly photogenic 17 Arch Bridge links the lake's eastern shore to South Lake Island. The most pleasurable way to escape the crowds is to take a stroll on the window - shaded paths and arched bridges that encircle the lake - bring your camera and a picnic.