Sacred Bukhara is one of the most esteemed cities in Islamic civilization. It is situated in the centre of the ancient agricultural oasis in the lower reaches of the Zarafshan River(3946N, 6425'E). Bukhara gained the status of a sacred town in pre-Arabian times. It was probably an ancient temple area, dating back to the 2nd millennium B. C. The name of the city is related to the Sanskrit "vihara" "shrine, monastery." The same idea is rendered by medieval sources that report that the Zoroastrian Magi and idolaters translated the name "Bukhara" as a "temple." "Bukhara", as well as "vihara", can be derived from the Sanskrit "Varahi" the land of boar (Varaha)", which means "holy land", as the boar was revered as a symbol of the priesthood. 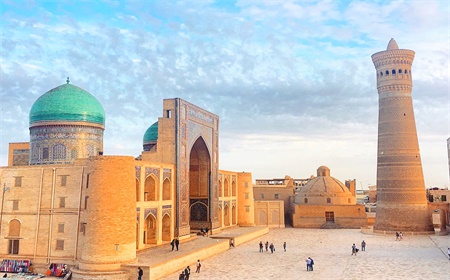 Referring to the holiness of the land of Bukhara there was a saying: " If anywhere in the world the light comes from above, in Bukhara, it streams out of the earth." As one of the strategic position on the Silk Road, the city has long been a centre of trade, scholarship, culture, and religion. During the golden age of the Samanids, Bukhara became a major intellectual centre of the Islamic world, second only to Baghdad. The historic centre of Bukhara, which contains numerous mosques and madrassas, has been listed by UNESCO as a World Heritage Site.

The earliest layers of the urban culture of Bukhara have an age of 2500 years. Its most ancient monuments are the well of Job-Chash-ma-Ayub, associated with the name of the prophet Job(Ayub), and citadel Ark, which had a major Zoroastrian temple. Local rulers struck their own coins from the 2nd century B.C. In the 3rd - 4th centuries after a great drought, Bukhara's oasis went through a period of decline. A recovery began in the middle of the 5th century and was associated with the reviving of trade on the Silk Road. 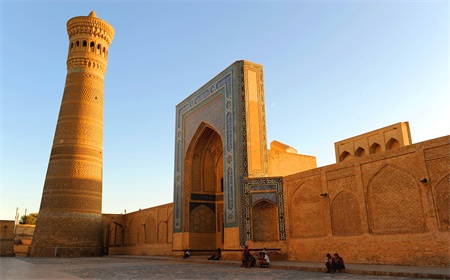 The Hephthalites ( 5th to 7th Centuries ) and then the Turks (6 to 7th Centuries ) who conquered Bukhara land patronized the trade and collect taxes. In the 7th Century, the Bukhara Union of the Princedoms was headed by rulers with the title of Bukhar-Hudat. In the early eighth century, the Arabian commander Quteiban conquered  Bukhara and constructed the first mosque in the city. At the end of the 9th century, Bukhara became the capital of the Samanid Power. In the 9th - 11th Centuries the city was protected with new high walls. The title Po-i Kalan belongs to the architectural complex located at the base of the great minaret Kalan.

Kalyan Minaret (Great Minaret) is the main symbol of sacred Bukhara. For a thousand years, this sacred tower has dominated Bukhara, declaring the greatness of the Islamic faith. At the foot of the minaret is the central religious ensemble of Bukhara-Pol-Kalyan (literally"Foot of the Great"). Kalyan Is a round tower, 9 m In diametre at the foot and 6 m at the top. One can get into the minaret through a passage from the roof of the cathedral mosque. Inside the tower, there is a spiral staircase with 104 steps, at the top is a lantern with 16 arches. The minaret is 45.6 m high. Initially, it was even higher as the upper link of the minaret was above the lantern. For some reason (possibly because of an earthquake), it was lost and upgraded later. The cornice has an inscription testifying to the date of construction-1127, and the architect's name-Bako. The upper part of Kalyan minaret was damaged during Red Army's artillery attack and air bombing of Bukhara in 1920. It was rebuilt during the restoration. 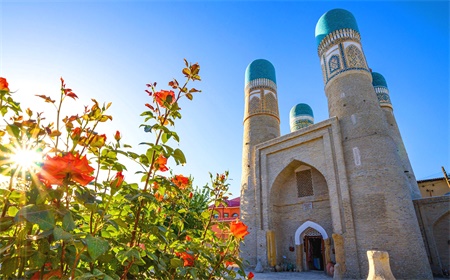 Kalyan Mosque was completed in 1514 and is equivalent in scale to the Bibi-Khanym Mosque in Samarkand in size. The mosque can accommodate almost twelve thousand people. Although the Kalyan Mosque and Bibi-Khanym Mosque of Samarkand are of the same type of building, they are different in terms of the art of building. Two hundred and eighty-eight monumental pylons serve as a support for the multi-domed roofing of the galleries encircling the courtyard of Kalyan Mosque. The longitudinal axis of the courtyard ends up with a portal to the main chamber (maksura) with a cruciform hall, topped with a massive blue cupola on a mosaic drum. The edifice keeps many architectural curiosities, for example, a hole in one of the domes. Through this hole, one can see the foundation of Kalyan Minaret. Then moving back step by step, one can count all belts of brickwork of the minaret to the rotunda.

The construction of Mir-i-Arab Madrasah (Miri Arab Madrasah) is attributed to Sheikh Abdullah Yamani of Yemen - called Mir-i-Arab, who is the spiritual mentor of Ubaidullah-khan and his son Abdul-Aziz-khan. Ubaidullah-Khan waged permanent successful war with Iran. At least three times his troops seized Herat. Each of such plundering raids on Iran was accompanied by the capture of a great many captives. They say that Ubaidullah-khan had invested money gained from the redemption of more than three thousand Persian captives into the construction of Mir-i-Arab Madrasah. Ubaidullah-Khan was very religious. He had been nurtured in high respect for Islam in the spirit of Sufism. His father named him in honour of prominent sheikh of the 15th century Ubaidullah al-Ahrar (1404–1490), by origin from Tashkent Region.

In the secind side Khans of Shaibanid dynasty were standard-bearers of Koran traditions. The significance of religion was so great that even such famed khan as Ubaidullah was conveyed to earth close by his mentor in his madrasah. In the middle of the vault (gurhana) of the Mir Arab madrasa is the wooden Tomb of ubadurakhan. At his head is wrapped in the moulds his mentor, Mir-i-Arab. Muhammad Kasim, mudarris (a senior teacher) of the madrasah (died in 1047 hijra) is also interred nearby here. The portal of Miri Arab Madrasah is situated on one axis with the portal of the Kalyan Mosque. However, because of some lowering of the square to the east, it was necessary to raise a little an edifice of the madrasah on a platform.

A minaret named after the spiritual ruler of Bukhara, Sadr Burhan ad-Din Abd al Aziz was constructed at the end of the 12th century in Vabkent. The minaret was the second largest in Bukhara oasis and became a part of the Friday mosque, The similarity of architectural solutions suggests that it could have been built by one of the students of Bako-the architect of the Kalyan minaret. It is a more slender brick tower 39 m high, 6.2 m. in diameter at the base and 2.8 m, at the top. Vabkent minaret, as well as Kalyan, is crowned with an elegant arched structure, called "lamp" by analogy with a lighthouse ( "minaret" is derived from Arabian "manara"- a place of burning fire, lighthouse ). The trunk of the minaret is faced with doubled brickwork, has narrow belts of ornaments and Islamic epigraphic texts. The base of the lamp is decorated with stalactites. For centuries, Kalyan minaret and Vabkent minaret remained unrivalled in scale, setting an elevated standard for sacred towers of Central Asian Islamic architecture.

Lyabi-Hauz is one of the most popular holiday destinations for Bukhara residents and tourists. It is a broad area around an ancient artificial reservoir. This largest pool of medieval, Bukhara is located in the central part of the city. It was made in about 1620 between the Kanaka and Madrasah, constructed by the order of the Nadir Divan-Beahi. The two new buildings and Kukeldash Madrasah formed a harmonious architectural ensemble with a reservoir in the centre. The pool is 42 metres long, 36 metres wide and about 5 metres, deep. contains more than tour thousand cubic metres of water, which comes by the ancient canal Shabrud. The banks of Lyabi-Hauz have stone steps, So it was easy for Bukhara water-carriers to fill their leat her skins with clean water. During four hundred years this place has been arranged for tea drinking open pavilions (Chaikhana) and commercial shops. In the 20th century, a monument to a legendary folk hero-the cheerful joker Khadja Nasr ad-Din was placed in the park near Lyabi-Hauz.

The palace Sitorai-Mohi-Hosa "Elegant Star of the Moon" was the country residence of the Bukhara amirs. It is situated 4 km north of Bukhara in the area of a drained swamp. Parts of the palace buildings existed there under Amirs Nasrullah and Muzaffar. But large-scale construction in Sitorai-Moh-Hosa was started only in the time of Amir Abd al-Ahad died in 1910) The palace complex had been built for two decades by the end of the century. The old palace was constructed under Amir Abd al-Ahad-khan. He sent Bukhara masters to Petersburg and Yalta to study Russian architecture. Using Russian experience, local architects headed by usto Khadja Hafiz built a splendid building that combined local Bukhara and European traditions. The palace throne-yard played a major role. During the Amir's reception ceremonies the court elite stood under its arches. Some of the buildings of the palace were designed by an engineer, Ignatiy Sakovich.

The new palace complex of Sitorai-Mohi-Hosa was finished in the time of amir Alim-khan. It had grand entrance arch, yard with galleries. the main building in the European style and house for the amir's harem in the garden. New structures were designed by engineer Morgulis. Dutch tiled stoves, stained glass and mirrors were supplied by Russian plants. The marble lions at the entrance were sculptured by Nurata masters, they also carved marble spillways for the hauz in the form of a dragon jaw. The carved ganch panels on mirror background in "The White hall" were made by Bukhara masters headed by usto Shirin Muradov. The paintings in the reception room-by us to Hasan-Djan. They have recognized masterpieces of Bukhara craft. After the revolution of 1920. Sitorai-Mohi-Hosa was the chairman of the Supreme state body of Bukhara National Republic (1920-1924)-all-Bukhara Kurultai.